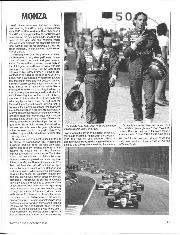 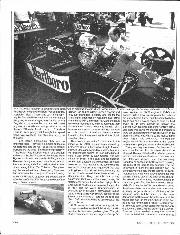 Well, I have never seen that before have been watching Grand Prix racing pretty regularly since 1948 and this was the first time I had seen a Grand Prix starting grid without a front row! Even more bizarre, the pole-position driver was at the back of the grid and the reigning World Champion was sitting in his spare car in the pit lane. All that, and the red light was on, with the green imminent, to start the 57th Italian Grand Prix at Monza.

The red light went out, the green came on and the 26 starters on the grid surged forward. In less than 100 yards the black and gold Lotus of Ayrton Senna suddenly slowed dramatically as the clutch gave out and he came to rest with cars passing him on both sides, while the razor-sharp reflexes of his fellow Formula 1 drivers prevented him being hit up the back as he sat in his Lotus, with his arm raised. When the regulatory fire-prevention cars and the doctor's car had gone by, Alain Prost was unleashed from the pit road and set off in hot pursuit, while Senna managed to make his Lotus drag itself off the track to the right, where he parked it and retired. It was interesting that in the turmoil of being stranded in the middle of the track, with cars whizzing by on both sides, he had kept the Renault turbocharged engine running, until it was clear for him to turn right and limp away with just sufficient friction in the clutch to move slowly. Many people thought a drive-shaft had broken, or a drive-shaft joint, or even a gearbox shaft, but it turned out to be a simple matter of the clutch. He had sensed trouble as he slipped the car into gear when the red light came on, indicating four to seven seconds before the green light would shine, because the clutch began to drag and he had had to give a dab on the brake pedal to stop creeping forward.