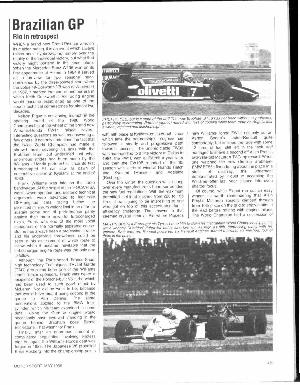 When a brand new Grand Prix car wins on its maiden outing, it is an event which always raises one's eyebrows: not simply over the quality of the individual victory, but what that victory might portend in the near future. When the Mercedes-Benz W196 won on its first appearance at Reims in 1954 it served as a preview for two seasons near-dominance by the three-pointed star; when the Lotus 49-Cosworth V8 won at Zandvoort in 1967, it marked the start of another era in which Keith Duckworth's V8 racing engine would become established as one of the sport's technical cornerstones for almost two decades.

Nelson Piquet's convincing triumph in the opening round of the 1986 World Championship at the wheel of the brand new Williams-Honda FW11 raised several interesting questions as well as answering a few others. It not only underlined the fact that the twice World Champion had made a shrewd move severing his links with the Brabham team, but underlined just what enormous strides had been made by the Williams Honda partnership since its first turbocharged F1 car saw its dawn of competitive action at Kyalami at the end of 1983.

Frank Williams was late on the turbo bandwagon. At the height of the "TOCA/FISA wars", when spurious and esoteric technical arguments were advanced to legitimise DFV-engined cars racing below the permitted minimum weight limit in an effort to sustain some sort of performance parity against their more powerful turbocharged rivals, Frank was one of the most vocal supporters of the normally aspirated cause. But he has always been a professional racer and his underlying shrewdness could be seen in his assessment of which route to follow when it became inevitable that the turbocharged engine route was the only one to follow.

Although the Paris-based Franco-Saudi high technology Techniques d'Avant Garde (TAG) group had been one of the Williams team's major sponsors, Frank was never a recipient of the Porsche-built V6 turbo which has been used to such good effect by McLaren. Nor did he want to be, because that would have meant being second in the queue to Ron Dennis. The same reservations applied to the BMW four-cylinder, which his team examined in some detail. Using the German engine would necessarily have involved standing in the queue behind Brabham boss Bernie Ecclestone. That wasn't for Frank.