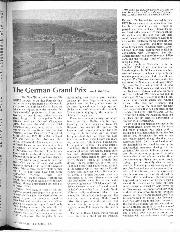 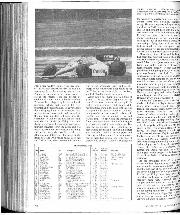 When we went to the first Formula One race on the new Nürburgring last October it was to see the European Grand Prix, an extra event slipped into the calandar for "administrative" purposes, so it was not necessary to take it very seriously as an event, though it did score points for the Manufacturers' and Drivers' Championships. This year the visit to the Eifel Mountains was much more serious, for it was for the German Grand Prix, the first "Grosser Preis von Deutschland" to be held in the Eifel since 1976. If the British Grand Prix was held on the Silverstone Club circuit, instead of the 3 mile outer circuit, or at Brands Hatch on the club circuit within the stadium, instead of the exciting bit out to Hawthorn's and Westfield. I don't think there would be much enthusiasm among the followers of the Grand Prix of Great Britain. The new Nürburgring seems to have the same effect on the Germans and 67,000 spectators turned up to watch the German Grand Prix, a mere shadow of its former self. In the past there have been some memorable "Grosser Preis von Deutschland" on the mighty Nürburgring but the best we are going to get on the new (Mickey Mouse) Nürburgring are going to be "forgettable".

Formula One today is such a slick and highly organised travelling circus, prepared to erect its "big top" anywhere where the money is good, that everyone would be assembled and organised on our village green if the money was right. It would only be on Friday morning at the scheduled 10 am when practice was due to start that someone would say "here, wait a minute, we can't race on grass". One thing that the new Nürburgring does have is good facilities, spacious pit lane, large workshops, vast paddock area, hospitality suites above the pits, heat, light and sound in the garages and obviously ease of entry into the Formula One sanctum judging by the number of children in the pit lane.