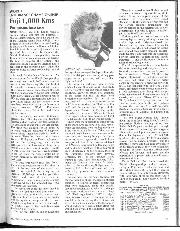 Nine years ago Niki Lauda made a decision which cost him the Formula 1 World Championship, when he pulled out of the Japanese Grand Prix at Fuji. It was pouring with rain and the track was flooding in places, and in those conditions he felt that he might have his second major accident in a space of three months. In October the World Endurance Championship teams faced exactly the same dilemma and, having the time to consider their options, the Europeans made a collective decision not to take part in the shortened race. When the pace car pulled off after 10 slow laps, to did they.

So much for the fact of the matter. An event counting for the World Championship — though worth only half points, since it was cut to two hours, arguably one-third of the intended duration — did take place. There were no major incidents, and the race was won handsomely by Kazuyoshi Hoshino in the new Nissan V6 turbo powered March 85G. By then the Europeans had lost face, a great sin in Japan, and the spectators must have been wondering about the bravery of newly crowned World Endurance Champion drivers Derek Bell and Hans-Joachim Stuck.

The Europeans, including Rothmans-Porsche, the TWR Jaguar, and Reinhold Joest teams had made an inevitable decision, but explaining it was quite another matter. The track was deluged for 24 hours by torrential rain, the backwash of a typhoon which missed Japan but made its mark all the same. There had been a minor earthquake on Friday and, as Derek Bell pointed out at the prize-giving, the regular Participants are still recovering from three serious accidents in recent events. It would be true to say that their hearts really weren't in the job when the drivers woke up on Sunday morning to see rain pouring from dark skies.