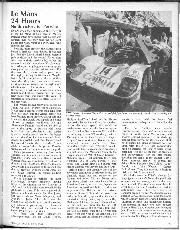 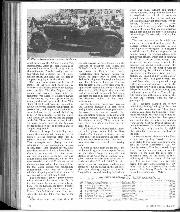 Even when they announced their boycott of the Le Mans 24-hour race in March, Porsche must have known that success was assured. Did not they take the top eight places last year, humbling every rival who showed his face? Possibly, after practice, the Stuttgart men began to harbour some doubts. It was not just that the Lancia-Martini team annexed pole position and the second fastest time (that was entirely predictable), rather the manner in which it was done. No blow-ups, no crashes, no bungling, not even any spring changes or aerodynamic adjustments. For this race the Italians had prepared very thoroughly, testing for 20 hours at Mugello (with the Silverstone cars, almost as they were when they retired) and then four more at Monza concentrating on the high speed adjustments. Lubrication to the turbochargers had been improved and other minor modcations carried out, but their new-found form was largely the result of painstaking preparation so often lacking in the past year.

Bob Wollek looked happy after recording 3 min 17.11 sec (154 mph) for pole position. It was half a second slower than Ickx's pole time last year, but the Alsace driver had been baulked three times by slower cars and knew that the Lancia was capable of a 3 min 14 sec in perfect conditions. He and Alessandro Nannini would not be able to run at that speed in the race with lower boost from the turbochargers and harder tyres, but undoubtedly they had the fastest car and, therefore, had more in hand. Paolo BariIla, Mauro Baldi and Hans Heyer shared the second Lancia which recorded 3 min 20.47 sec — and then the private Porsche teams jostled for the next rows on the grid. Stefan Johansson, partnering Jean-Louis Schlesser and Mauricio de Narvaez in one of Reinhold Joest's three New Man sponsored Porsche 956s, was third fastest overall with a time of 3 min 26.10 sec. Perhaps, though, Joest would pin his hopes on the second car, that of previous winners Henri Pescarolo and Klaus Ludwig, in which Ludwig recorded 3 in 28.42s.