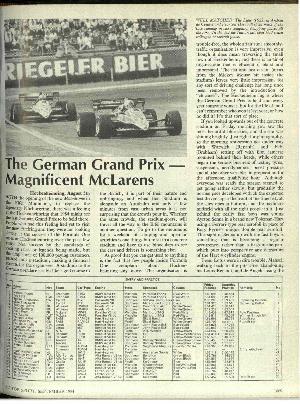 With the opening of the new Motodrome in the Eifel Mountains, to replace the legendary Nurburgring, there was a feeling at the Hockenheimring that 1984 might see the last German Grand Prix to be held there. People who had this feeling had yet to visit the new Eifelring and they were not looking closely at the success of the Formula One races at Hockenheimring over the past few years. Not success by the standards of exciting races or legends being made, but the simple one of 100,000 paying costumers packed into a stadium, making a financial success for the organisers. A stadium to the German populace is a bit liken golf course to the British, it is part of their nature and upbringing, and when that Stadium is alongside an Autobahn and only a few minutes from vast urban areas it is not surprising that the crowds pour in. Whether the same crowds, the stadium-goers, will travel all the way to the Eifel mountains is another question. To go to the mountains for a weekend of camping and open-air activities is one thing, but to sit in a concrete stadium and have to use binoculars to see the cars and drivers is something else.

As proof that you can get used to anything is the fact that few people inside Formula One complain about Hockenheimring any more. The organisation is trouble-free, the whole affair runs smoothly, traffic organisation is very impressive, even though it does mean traversing the small town of Hockenheim, and there is an air of organisation that is efficient if bland and impersonal. The flat and fast circuit (apart from the Mickey Mouse bit inside the stadium) leaves very little impression, for any sort of driving challenge has long since been removed by the introduction of "chicanes". The Hockenheimring is where the German Grand Prix is held and every year someone wins it, but for the life of me I can't remember who won it last year, or how he did it! It's that sort of place.