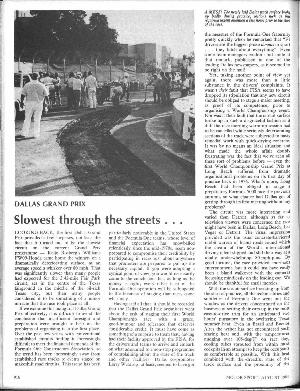 Slowest through the streets . . .

Looking back, the first Dallas Grand Prix provided a few surprises, not least the fact that it turned out to be the slowest circuit on the current Grand Prix programme — Keijo Rosberg's Williams FW09-Honda came home the winner, on a dramatically deteriorating surface, at an average speed a whisker over 80 mph. That was significantly slower than many people had expected for the 2.42-mile Fair Park circuit, set in the centre of the Texas fairground in the middle of the oil-rich Texas city, but then many people considered it to be something of a minor miracle that the race took place at all.

If we examine this inaugural Dallas Grand Prix objectively, it is difficult to avoid the conclusion that insufficient foresight and preparation were brought to bear on the problems of organising it in the first place. Over the past few years, with conventional established circuits finding it increasingly difficult to meet the financial demands of the Formula One Constructors Association, so the trend has been increasingly away from established race tracks to events staged on makeshift road circuits. This trend has beenparticularly noticeable in the United States and the Formula One teams, whose level of financial expectation has snowballed relentlessly since the mid-1970s, seem now prepared to compromise their credibility by participating in races just about anywhere that promoters are prepared to put up the necessary capital. If you were adopting a cynical point of view, you would necessarily come to the conclusion that, as long as the money is right, every other facet of the Formula One operation will be subjugated to the business of staging that race, come what may. Having said all that, it should be recorded that the Dallas Grand Prix organisers went about the task of staging their first World Championship race with a grace, good-humour and tolerance that deserves considerable credit. It must have come as something of a surprise to them that, having had their facility approved by the FISA, for the drivers and teams to arrive and embark on what amounted to a non-stop programme of complaining about the state of the track and other facilities. Dallas co-promoter Larry Waldrop, at least, seemed to have got the measure of the Formula One fraternity pretty quickly when he remarked that "F1 drivers are the biggest prima donnas in sport . . . they bitch about everything". Even some team managers couldn't but smile at that remark, publicised in one of the leading Dallas newspapers, as it seemed to be right on the nail!