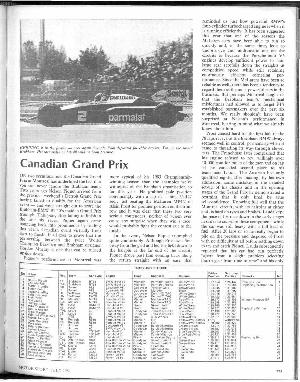 On two occasions now the Canadian Grand Prix at Montreal has underlined the fact that you can never ignore the Brabham team. Two years ago Nelson Piquet arrived from the previous weekend's Detroit Grand Prix having failed to qualify for the American event — and went straight out to score the Brabham-BMW BT50's maiden Grand Prix triumph. This year, after failing to finish in the first six races, Piquet again came bouncing back into prominence by leading this year's Canadian event virtually from start to finish. It all goes to prove that the partnership between the twice World Champion Brazilian and Brabham designer Gordon Murray is one that can be turned upside down.

Piquet's performance at Montreal was more typical of his 1983 Championship-winning season than the shambles we've witnessed of the Brabham organisation so far this year. He grabbed pole position convincingly with a lap in 1 min. 25.442 sec., just beating the McLaren MP4/2 of Alain Prost for premier position on the front row and it was clear that these two very serious contenders, neither of whom ever cause any surprise when they win a race, would probably fight the contest out to the finish.

In the event, Nelson Piquet triumphed quite comfortably. Although Prost was first away from the grid and led the field down to the hairpin at the far end of the circuit, Piquet drove past him coming back along the return straight with an ease that reminded us just how powerful BMW's four-cylinder turbocharged engine is when it is running efficiently. It has been suggested this year that one of the reasons the McLaren cars have been able to run so quickly and, at the same time, look so unobtrusive and undramatic out on the circuits is because the Porsche-built V6 engines develop sufficient power to haul large rear aerofoils down the straights at competitive speed while still retaining enormously efficient cornering performance. Since the McLarens have been so reliable as well, there has been a tendency to regard them as the most powerful cars in the business. But perhaps Montreal taught us that the Brabham team's mechanical misfortunes had allowed us to forget F1's established pacemakers over the past six months. We really shouldn't have been surprised at Nelson's performance in Montreal, bearing in mind what we already know about him!