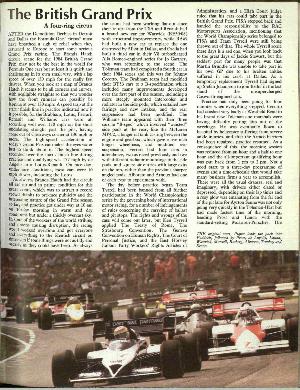 After the Demolition Derbies in Detroit and Dallas the Formula One "circus" must have breathed a sigh of relief when they returned to Europe to start some serious Grand Prix racing. The Brands Hatch circuit, scene for the 1984 British Grand Prix, may not be the best in the world for Formula One cars but at least it is quick and challenging in its own small way, with a lap speed of over 130 mph for the really fast drivers. When you look at a map of Brands Hatch it seems to be all corners and curves, with negligible straights so that you wonder how the front runners can possibly be lapping at over 130 mph. A speed trap at the start / finish line in practice indicated how it is possible, for the Brabham, Lotus, Ferrari, Renault and Williams cars were all recording well over 170 mph on the short undulating straight past the pits, having come out of Clearways corner at 130 mph or more. The high-speed acceleration of today's Grand Prix car makes the eyes water just to think about it. The highest speed recorded over the start / finish line during practice and qualifying was 177 mph by de Angelis in a Lotus-Renault. On race day, under race conditions, most cars were 10 mph slower, including the Lotus.

As always, Brands Hatch had the circuit all set up and in prime condition for this great event, which was to attract a record crowd thanks to pre-race publicity and the interesting nature of the Grand Prix season so far, and practice got under way at 10 am on Friday morning in warm and dry conditions but under a thickly overcast sky. In spite of the workers of the world striking and unions causing disruption, the racing world worked overtime and got everyone and everything to the Kentish circuit on time even if some things were not as tidy and orderly as they could have been. As always the teams had been working flat-out since their return from the USA and Renault had a brand new car for Warwick (RE50/08) with structural improvements, while RAM had built a new car to replace the one destroyed by Alliot in Dallas, and Osella had built a third car in their V8 turbocharged Alfa Romeo-engined series for Jo Gartner, who was returning to the scene.