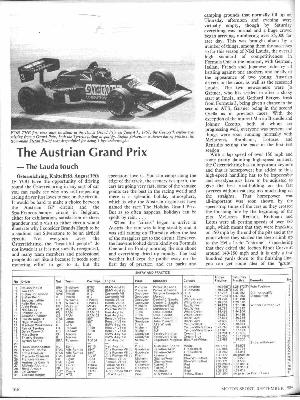 If you have the opportunity of driving round the Osterreichring in any sort of car you can easily see why any self-respecting racing driver just loves to race on the circuit. It would be hard to make a choice between the Austrian GP circuit and the Spa-Francorchamps circuit in Belgium, either for exhilaration, satisfaction or sheer grandeur and a visit to either circuit would illustrate why I consider Brands Hatch to be a stadium and Silverstone to be an airfield circuit. Not everyone loves the Osterreichring, the "beautiful people" do not invade it as it is not socially recognised, and many team members and professional people do not like it because it needs some motoring effort to get to it, but the spectators love it. You can camp along the edge of the track, the scenery is superb, the cars are going very fast, some of the vantage points are the best in the racing world and there is a splendid holiday atmosphere, which is why the Austrian organisers have named the race The Holiday Grand Prix. But as so often happens, holidays can be spoilt by rain. . . .

When the "circus" began to arrive in Austria the rain was falling steadily and it was still raining on Thursday when the last of the stragglers got to the circuit. However, the heavens looked down kindly on Formula One and on Friday morning the sun shone and everything dried up rapidly. The bad weather had kept the public away on the first day of practice, and car parks and camping grounds that normally fill up on Thursday afternoon and evening were virtually empty, though by Saturday everything was normal and a huge crowd began arriving, numbering over 85,000 for race day. This was brought about by a number of things, among them the successes so far this season of Niki Lauda, the overall high standard of competitiveness in Formula One at the moment, with German, Italian, French and Japanese industry all battling against one another, and finally of the appearance of two young Austrian drivers in the race, as well as the seasoned Lauda. The two newcomers were Jo Gartner, who has settled in after a shaky start at Imola, and Gerhard Berger, fresh from Formula 3, being given a chance in the second ATS, Gartner being in the second Osella as in previous races. With the exception of the injured Martin Brundle and Johnny Cecotto, both of whom are progressing well, everyone was present and things were soon running normally with McLarens, Brabhams, Lotuses and Renaults setting the pace in the first test session.