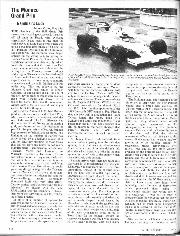 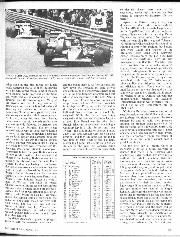 The planning of the 1983 Grand Prix season is not working out too well. It started off all right in Brazil, with everyone surprisingly fit and ready to race, then the scene moved to Long Beach where there was an all-pervading atmosphere of it being the last Formula One race in the Californian sea-port town. The European scene began entirely on the wrong foot, by having the French Grand Prix in April instead of its traditional mid-summer date in July; added to which it was held at the featureless Paul Ricard circuit and afterwards there was the feeling that the European season had not really begun. Then came the San Marino GP at Imola and all was alive and well with a superb meeting, a great race, a fantastic atmosphere and you really felt that 1983 was under way. This was followed by the Monaco Grand Prix which is always abundant in atmosphere and at the end of the first day of practice things were looking good with Renault and Ferrari in a toe-to-toe battle. But then the rain came. Monte Carlo in the rain is awful. You might as well be at Cleethorpes.

As usual the Automobile Club of Monaco produced its own rules for the Grand Prix, which are at variance in many ways with the rest of the world. The first difference was the limitation of only 20 cars on the starting grid, and the second was the restriction of petrol in the pits, which effectively banned high-pressure refuelling and pit stops. The limitation on the number of starters was easily solved by a qualifying session at 8 a.m. on Thursday morning for those teams that did not score any points in last year's Manufacturers Championship, which were Toleman, March and Theodore, so Warwick, Giacomelli, Guerrero, Cecotto and Salazar were out bright and early and the fastest three were to move up into the serious business of practice and qualifying due to start at 10 a.m. Everything that could go wrong did go wrong with the Toleman team and Warwick had to use all three team cars before he got in a decent lap, and the Theodore-Ensign team successfully eliminated itself with very little effort. Cecotto crashed and Guerrero's car broke a driveshaft, so Salazar with the lone RAM-March and the shambolic Toleman team were the survivors to join the rest for the official practice.