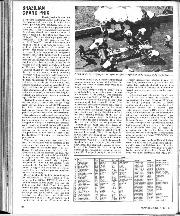 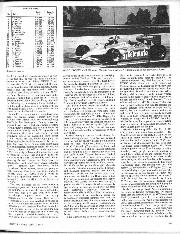 By the time the massed ranks of the Formula One Constructors took to the circuit in Brazil for official pre-Grand Prix qualifying, most of the cars must have almost been in a position to run round the 3.126-mile Aurodromo Riocentro without their drivers aboard, such was the amount of pre-race testing that had taken place there since Christmas. There was obviously a great deal of speculation as to the performance of the "new breed" of Grand Prix cars which have come in, being since the FISA re-wrote the technical rule book abruptly at the end of last season, the ground effect concept now having substantially been banned by the requirement of a completely flat lower surface of the cars between the front and rear wheels. Despite a degree of initial grumbling from the Constructors, who said, of course, they could never get their cars ready in time for the planned start to the season at Kyalami at the end of February, FISA and the South African organisers obliged by postponing the race until the end of the season, thereby providing everybody with another two weeks' grace before the first race. Interestingly, a large proportion of the teams had cars ready by the middle of January and were able to take part in the two Rio test sessions without much trouble, and, taken by and large, everybody had got their heads down and put in a tremendous effort. There was much new, and much revamped, to see in the sweltering Rio paddock, and details about the cars are presented separately from this report.

Testing the weekend prior to the race indicated that the British Toleman team had got things right with their totally revised TG183B powered by Brian Hart's compact four-cylinder turbocharged engine. It's a measure of how people can quickly change their standards that the Toleman lads, who twelve months ago would have been down on their knees praying with delight if they'd qualified in the top twenty, were slightly disappointed if they were anything but the fastest car on the circuit! Warwick had proved his worth as a driver by dominating the two pre-race test sessions, so it came as an enormous disappointment to him when he started the Brazilian Grand Prix from fifth place and not from pole position!

With lots of circuit experience under their belts, the competition was as scorching as the temperature from the moment the first practice sessions began on the Friday prior to the race. During the off-season there had been much speculation by various observers and teams that the day of the normally aspirated Cosworth DFV V8 engine was over, and that the 1½-litre turbocharged units would reign supreme throughout 1983. Well, although the stark results provided by the Brazilian Grand Prix may have tended to suggest this prediction is accurate, equally there were sufficient pointers to indicate that it is totally wrong!