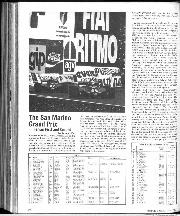 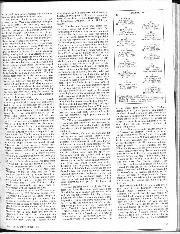 The Grand Prix of San Marino, held on the undulating Imola circuit, was a straightforward affair. It was a battle between Ferrari and Renault, with two cars apiece, when the circuit opened for official testing on Friday morning at the scheduled time of 10 a.m. From the time the first lap was turned until late Sunday afternoon there were no problems as far as the spectators were concerned, you were either a Ferrari fan or a Renault fan, and each side made it clear which side was theirs. There were some Alfa Romeo fans, but they were eclipsed from the word go, an if you were not wearing red and waving a Ferrari flag you were wearing yellow and black and waving a Renault flag. By Saturday afternoon there were more than 40,000 protagonists around the circuit, and on Sunday for the race the organisers said there were 100,000 around the circuit. This was a bit of an exaggeration, but for sure there were 75,000 and there might have been 80,000, and by the end of the day most of them went home well contented.

At the beginning of the week before the race the FIA Tribunal had sat in Paris and decreed that running cars under the 580 kilogrammes limit was not acceptable, no matter how anyone interpreted the wording of the rules. In consequence Frank Williams withdrew his cars, as did Bernard Ecclestone and Colin Chapman, while the McLaren team was withdrawn amid a certain amount of dissension in the management. Others among the Cosworth-powered "special builders" who have to toe the line in the Ecclestone-Mosley FOCA group also withdrew, as did the Talbot team under the direction of Guy Ligier, though his reasons were obscure. Among the FOCA "hard-liners" Ken Tyrrell broke ranks and appeared in the paddock with his two cars, replacing Slim Borgudd with Brian Henton for "business" reasons and his cars carried advertising for Candy Appliances and Imola Ceramics in return for money. Among the lesser lights of the FOCA clan Gunther Schmidt ignored the "strike call" by Ecclestone and Mosley, and had his two yellow and white ATS entries in the paddock for Winkelhock and Salazar. Why some of the FOCA teams went on strike was not quite clear, but whatever the reason they certainly Iet-down their drivers and their sponsors.