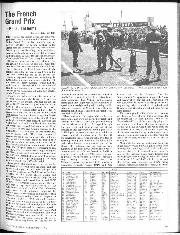 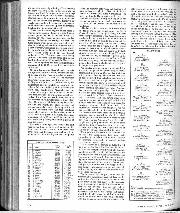 THIS report of the French Grand Prix could well have been tacked on to the end of the one on the British Grand Prix in last month's issue of MOTOR SPORT, for anyone involved in the French race had to be on their way to the south of France by the time the salvage men had finished cleaning up the rubbish and debris left over from the British race. Such are the vagaries and control of world-wide Formula One racing these days that publicity and money-making come before all else, and certainly before reason and logic. Only four clear days after the race at Brands Hatch finished, practice began at the Paul Ricard circuit in the south of France for the French Grand Prix, and in that time everything had to be packed up, repaired or replaced, transported something the 1,000 miles, unpacked and made ready for a 10 a.m, start on Friday morning. While half the world seems to have no work to do, the other half seem to have too much, so it was not surprising that one or two teams were not in the best of fettle for the French race.

Team Lotus had to make another substitution as, after attempting the British GP with his injured arm, Nigel Mansell was back on the sick list, so Geoff Lees was co-opted into the second Lotus 91. Otherwise everyone made the transfer from Britain to France safely and in order. A management decision within the Talbot-Ligier team decreed "no more time-wasting with the old JSI7" and there were three of the 1982 JS19 cars in the pits, number three being the new one that Laffite had raced at Brands Hatch (not number two as reported). Renault had to dig out an old one to replace the new one Arnoux crashed on the Brands Hatch start line, and this was RE38B, last seen at Monte Carlo. There was a distinctly nervous air about the team, as if the Guillotine was poised above them, ready to drop if they failed to win their own race, and rumour had it that already development money was being held back. The Fittipaldi team were preparing to run their new F9 car as their first string, keeping an old F8D as a spare, and some of the smaller teams like ATS and Tyrrell had come up with smoother bodywork in the hope of gaining a few extra m.p.h. down the long Mistrale straight.