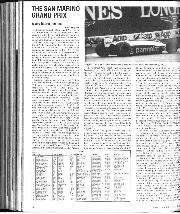 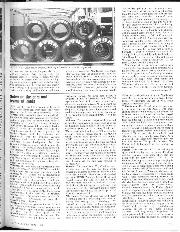 To fill out the ranks of the Grand Prix races in the European part of the 1981 season the Italians came up with the splendid idea of holding a second event in Italy. As the International rules do not allow this unless the circuits are more than a specified distance apart (to allow two events in the USA) the Automobile Club of San Marino put in a claim for a Grand Prix as San Marino is an autonomous Principality within the Italian mainland. As San Marino is a recognised FIA country the claim was accepted and as there is no racing circuit within the Principality it was agreed to hold the first San Marino Grand Prix at nearby Imola. Everyone was delighted. While many of us prefer Monza for the Italian Grand Prix, where it will be run this year, there is nothing wrong with the present-day Imola circuit and nobody was going to complain about a second race in Italy. If you do not like motor racing in Italy you do not like motor racing.

Nothing is ever perfect these days, and the first thing was the banning of the Lotus 88 by an FIA Tribunal the previous week and Colin Chapman's withdrawal of Team Lotus from the entry. Briefly, this came about from pressure from his "friends" and rivals in the other teams, over minute nit-picking on word definitions. When everyone presented themselves for the usual pre-practice scrutineering the Italian scrutineers said in so many words, "If you want to play silly b--s and nit-pick, all right" and they promptly disqualified all the cars except those of Renault, Talbot, and the new Toleman team. With Ferrari and Alfa Romeo thrown out the scrutineers could not be accused of being biased. The detail on which they caught everyone was that any specific part of the car influencing the aerodynamic performance of the car must remain immobile in relation to the vehicle. For a long time most designers have been using rubber sheet or plastic sheet to fill the gap between the bodywork and the rear wheels, or to form a rubbing strip on the bottom of the side-plates on nose fins, or as "trim" to the bottom edge of the side-pods. The chief scrutineer went round all the cars and tweaked these appendages between his finger and thumb and merely said "It moves". There was no defence. If the Frank Williams and Teddy Meyers of the Formula One world want to play silly b--s, let's be really silly. Renault, Talbot and the new Toleman cars had no flexible edges so they were all right and Ferrari, Alfa Romeo and March soon removed theirs from the rear wheel areas, while other teams dutifully replaced flexible plastic or rubber with aluminium sheet. The teams of Williams, Tyrrell, Brabham, Osella, Fittipaldi and Arrows were all challenged on another point. In previous races this year the Brabham cars have been using a hydro-pneumatic suspension adjusting system which lowers the car from the regulation six centimetres ground clearance, once it is out on the circuit and at high speed. Once the rule was made about no more side-skirts which rub the ground, the limit of six centimetres was agreed upon as an arbitrary figure to use as a base line. The Brabham system was clearly dodging this rule but it was difficult to prove it. The other teams mentioned above all turned up with similar systems and the scrutineer did not say they were illegal, he merely asked the designers to explain what the system did and why they thought it was legal. Never a dull moment in Formula 1.