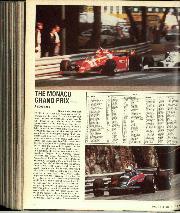 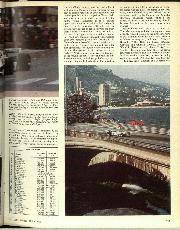 It will be a sad day when common-sense prevails and the Grand Prix is no longer held round the streets of Monte Carlo, when Formula One drivers no longer do the things that their union would not like them to do, like driving through a tunnel, charging up a steep hill with a blind brow and a fast corner at the top, plunging downhill to a hairpin bend with no escape road or run-off area, or bouncing over bumps which must surely shake their back-teeth, for that and much more comprises a lap-of the Monte Carlo circuit; always has done, and hopefully always will. Certainly some parts have changed over the years, but so have the cars and the speeds and the power-to-weight ratios; it is still street-racing in its purest form, like the long-gone events at Nice, Barcelona, Naples, Bari, Geneva, Genoa, Lausanne, San Remo, Angouleme, Bordeaux, Aix-Ies-Bains; La Baule and Sables d'Olonne. Thankfully, the world of Formula 2 still has the circuit at Pau and Chris Pook and the Long Beach Grand Prix Association have brought a touch of healthy madness into this boringly sane world with their street race in California, every bit as good as, or even better than, Monte Carlo. Anywhere else the suggestion of starting the proceedings a day earlier, and having Friday off, would be met with storms of protests from the "professionals" but in Monte Carlo it seems to be accepted by everyone. In a grubby paddock on a converted airfield or artificial autodrome everyone gets irritable and they "tick" about this and that, but on the harbour's edge at Monte Carlo, all is sunshine and light; or at least it seems to be. Once into the bay of the Principality of Monaco, there is no easy way out, retreating is hampered by the mountains, escape to the east is blocked by Ferrari and Alfa Romeo enthusiasts pouring in from Italy, the way west is hampered by hopeful Renault and Talbot enthusiasts queueing up to get in and in front of you is the Meditteranean. If you are affluent enough, and there are a lot of such people in Monaco, you can sail away in your boat or escape vertically in your helicopter. For normal people you are trapped in Monte Carlo and it is up to you to make the most of it, for motor racing enthusiasts it is a unique opportunity not to be missed, like the Le Mans 24 hour race or the Indianapolis 500 mile race. For anyone lucky enough to get an entry for the event there is more than enough to occupy their minds, for there is no opportunity to spend a couple of days "testing", flogging round and round wearing your own personal groove into the circuit. At Monte Carlo the first official practice session starts at 10 a.m. on Thursday morning and that is the first opportunity for anyone to drive a racing car on the Monegasque circuit, unless you are a "rabbit". With so many teams eager to take part in the "round-the-houses" race and with the tight little circuit being limited to a grid of twenty cars, some weeding-out had to be done. This was done in two stages, firstly by a pre-qualifying session for teams who did not score points in any 1980 races, which whittled thirty-two drivers down to twenty-six, and then by Thursday and Saturday afternoon qualifying which whittled the twenty-six down to the required twenty. The 76 lap race then whittled the twenty down to one winner!