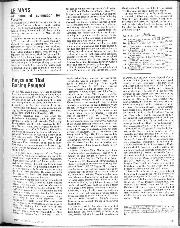 24 hours of domination for Porsche

In winning the Le Mans 24 hour race with Derek Bell, Jacky Ickx not only gave Porsche another victory for the German manufacturer, but also put his name firmly in the record books by becoming the only man to have won Le Mans on five occasions.

The Porsche 936, with its recently developed 2,650 c.c. turbocharged flat-6 engine (originally planned for use at Indianapolis, but made redundant by regulation changes) ran faultlessly throughout, leading the race for most of the first hour before making a tactical early pit stop to replenish the fuel tanks, which had purposefully been left light for the start. The Ickx/Bell car reappeared to lie in fifth place at the end of the hour, moving up to third spot during the second hour and taking the lead early in the fourth. Once re-established at the head of the field, the white Porsche stayed out in front for the remainder of the race to win fourteen laps ahead of a Rondeau M.379 CL, the 936 Porsche of Jochen Mass, Vern Schuppan and Hurley Haywood having dropped out of second place in the early hours of Sunday morning with clutch trouble. The unit was changed, and the car rejoined the race in ninth place, providing some excitement as it climbed back through the order to lie in fourth spot by mid-morning, but luck was against them, for Schuppan had second gear fail at the chicane, resulting in a spin and a stalled engine. By the time it rejoined with a new gearbox, an hour had been lost and it was down to 13th place.