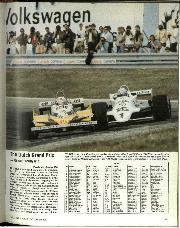 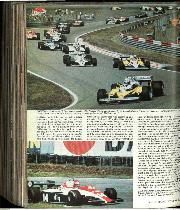 It takes me a good ten minutes to walk from the pits of the Zandvoort circuit to the Press grandstand from which I watch the race. That in itself is no great problem, the tiresome bit is that after battling with the crowds, dragging my feet through the deep sand of a car park, climbing the dark staircase up the back of the main grandstand where it smells as though cats have been urinating, I sit down right opposite the Williams pit where ten minutes before I was chatting to Patrick Head! Most circuits have tunnels for crossing the track, while Brands Hatch and Silverstone allow you to walk across the track before racing begins, but not at Zandvoort, the wire mesh fences are impenetrable. However, it did allow me time to think about things, how after three hours of testing and two hours of timed qualifying we had finished up with a totally predictable starting grid, and that the two Renaults of Prost and Arnoux had lapped within two hundredths of a second of each other on the first afternoon. The two qualifying hours, one on Friday and one on Saturday, used to be very exciting, but this year they have become boring and dull because they are hamstrung by rules. On Saturday afternoon, when the whole scene should have been boiling up to a climax, the Renault team and the Talbot team were packing up and the drivers had gone off to change out of their racing overalls, the reason being that they had used up their regulation two sets of tyres that are permitted for the hour of qualifying. This is one of those rules made with the best intentions but it has misfired. The constructors, the tyre people and the rule makers got a bit concerned last year when the consumption of tyres became out of all proportion, some of the Goodyear super-sticky ones only lasting three laps. Putting a limitation on the number of tyres used was agreed by everyone, but the actual decision has made rather a farce of the qualifying hour. After the morning testing a driver or team has to state which type of tyre they are going to use and then two sets of these are marked with the driver's racing number and that is all he has for the qualifying hour. Before any car leaves the pit lane it has to stop at the exit while marshals check that it has the right tyres, then it is allowed to go out on the track. That in itself irritates most drivers who just want to get out there and get on with the job. Then when he returns to the pits he has to go into a marked-off box to make sure his car is 6 cm off the ground, otherwise the times recorded in that session on the track are cancelled. While out on the track he has operated his hydraulic system and lowered the car so that the edges of the side pods just touch the ground. As these edges must not be movable designers have arranged for the suspension of their cars to be virtually solid, but even so the edges get worn away and more time is spent in the pits having new rubbing strips fitted to the side pods than is spent out on the track driving. All this is blatant rule breaking but because everyone is doing it everyone accepts it. When questioned about this Monsieur Balestre, on behalf of the rule makers, said "The cars are not illegal, but they do not conform to the Formula 1 rules" - there wasn't much answer to that!