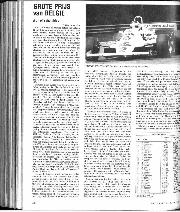 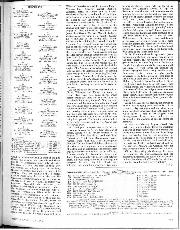 A bit of a shambles

The two days of practice before the Belgian Grand Prix were not only a waste of time, they were farcical. Partly because of rules and regulations and partly because of the weather, but at least it was not due to any fault of the drivers, who were all getting on with the job in spite of the difficulties. This year's "in-thing" is adjustable ride-height in order to cheat the 6 cm. ground clearance rule and the only teams who were not cheating were those who could not afford the mechanisms, like Ensign, or those who had enough problems, without adding new ones, like Toleman. All the regular and serious teams were cheating so openly that cheating now seems to be accepted as being legal. Systems for lowering the car once it was under way varied from hydro-pneumatic, though hydro-electric, to simple mechanical means and everyone seemed to think that the lowering of the car gave aerodynamic advantages, but one wonders whether the lowering of the centre-of-gravity of the car by 6 cm. (2.4 inches) did not have as great effect.

Because Team Lotus were back in the entry (after missing the San Marino Grand Prix) there were 31 aspiring competitors for this race and the recently agreed rules limit the number to 30 for practice, of which 24 can qualify for the race. The so-called "four-year stability on rules" would appear to have been modified already to a "four-day stability" and before practice was through it looked like becoming a "four-hour stability". Among the major changes to the scene was the appearance of the new Renault RE30 cars, which are lighter, smaller, neater and more compact than the RE20 series, and have the turbo-chargers located low down alongside the engine, one on each side. The handling could not be made satisfactory, so they were abandoned in favour of the older cars, and various problems on Friday afternoon meant that Arnoux did not qualify. Rain on Saturday stopped all hopes for the unfortunate Frenchman. The teams of Williams, Brabham, Tyrrell, McLaren, Ensign, Fittipaldi, March, Alfa Romeo, Talbot-Matra, Ferrari, Arrows, Theodore and Toleman-Hart were not changed radically from the Imola race, but ATS had only one entry and put in Borgudd instead of Lammers, and Osella put in Piercarlo Ghinzani for the injured Guerra. Ferrari were still using KKK turbo-chargers, March had painted their cars all-black, Lotus were running modified (a continuous process) Type 81 cars, McLaren were restricting the MP4 carbon-fibre car, to Watson, Brabham were without Gordon Murray, who had contracted mumps(!), Fittipaldi were only running Rosberg's car on Avon tyres, and Patrick Head was playing the role of "spectator" in the Williams pit.