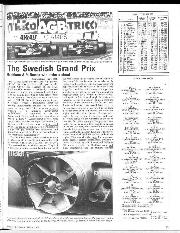 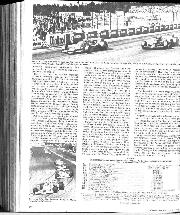 Brabham-Alfa Romeo win under a cloud

The superiority of the Lotus 79 “ground effects” car was severely challenged in the Swedish GP by the B–version of the BT46 Brabham-Alfa Romeo, a brilliantly conceived design even through there was considerable doubt as to its legality according to rules agreed upon by the Formula One Constructors Association and the CSI. The bone of contention was item 5 in Article 1 which is Definitions: Under the heading Aerodynamic Devices the definition states: - “Any part of the car whose primary function is to influence aerodynamic performance” is considered to be an Aerodynamic Device, and therefore according to Article 3, Item 7 “Aerodynamic devices must comply with the rules relating to coachwork (i.e. heights, widths etc.) and must be firmly fixed whilst the car is in motion. It is permissible to bridge the gap between the coachwork and ground by means of flexible structures subject to the coachwork measurements”.

The Brabham team made experiments with BT46/2, one of their earlier tests cars, and arrived in Sweden with BT46/6 (Lauda) and BT46/4 (Watson) modified in a similar manner. They had a large single water radiator lying flat on top of the Alfa Romeo flat-12 engine with the whole of the rear of the care between the wheels, totally enclosed an sealed off, with the exception of the upper surface of the radiator. At the back a very large fan was driven off the rear of the gearbox and this sucked all the air out form around the engine/gearbox area, which naturally caused cooling air to flow down through the horizontal radiator. So far so good. If the path from the underside of the radiator to the fan had been ducted and sealed there would have been no further discussion, but it was not. The fan could also suck away all the air around, and under the engine and also under the car. Flexible skirts under the car at the front, sides and rear, effectively sealed off the underside of the car so that the fan was creating a low pressure area under the car, causing a down load to be applied to the car (in effect, the reverse of a hovercraft). Now the important factor was that the Brabham team said that the primary function of the device was to draw air through the radiator and cool the engine. That was what they said. The arguments arose because certain constructors, principally Lotus, McLaren, Tyrrell, Surtees and Williams, did not accept what the Brabham team said. They maintained that the primary function influenced aerodynamic performance and therefore by Art. 3 It. 7 it had to be fixed whilst the car was in motion.