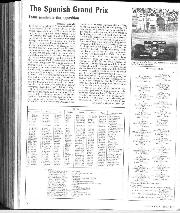 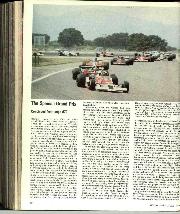 Just as the Belgian GP I reported elsewhere in this issue has sunk to a steady low at the Zolder circuit, the Spanish GP has done a similar thing at the twisty little Jarama circuit, out in the country to the north of Madrid. It is not the sort of circuit on which memorable high-speed driving can be seen, nor much in the way of wheel-to-wheel dicing, but as a simple safe circuit for today's Formula One, it is adequate. In its favour it does have a couple of downhill bends,: and a reasonable length of straight, while the pits and paddock are good and conducive to a nice atmosphere around the workshops and garages. By the day before practice was due to begin all the giant Volvo, Ford, Scania-Vabis and Fiat articulated tranSporters had arrived and packed themselves into the garage area. They are giant transporters-, as was shown by that of Team Lotus, when four racing cars were unloaded from its interior, the two regular Team Lotus 78 cars, numbers 2 and 3, the Belgian GP-winning Lotus 79/2 and a brand new car, 79/3. This new one was destined for Andretti, while Peterson took over the Belgian-winning car, and both drivers had their usual Lotus 78 as stand by in case of emergency. Team Lotus really did look strong.

Before the official practice began at 10 a.m. on Friday, for the regulation hour and a half, there was a little preliminary skirmish among the "rabbits" from which the four best would be let into the to a.m. practice. As Arnow: did not appear with the Martini car, and Ongais did not appear with the American-owned Shadow DN9, it left five contestants for the four places, so it was not so much which four would qualify for practice, but which one would fail. It proved to be Rosberg with the Ralt-based Theodore car. That business sorted out it meant there were 18 drivers ready for the two days of official practice, from which four were going to be disappointed (or frustrated) by the end of Saturday afternoon. As things turned out there were 26 frustrated drivers by the end of Friday afternoon, for the two Lotus 79 drivers not only dominated practice, they demoralised it. Within the overall practice Scene there was another fierce competition going on among the mid-field runners to qualify for the special attention of Goodyear. The tyre firm had named their chosen drivers who would get the best tyres possible, and the two best of the rest at the end of the first day of practice would get special tyres for the second day. In consequence practice was full of interest, with three major competitions taking place, the first for the front row of the grid, the second to be the two best runners on "standard" Goodyear tyres, and the third to scrape into the top 24 in order to take part in the race.