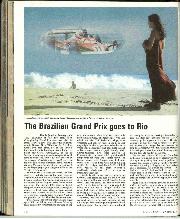 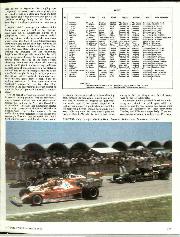 The second of the two early-season Championship Grand Prix races took place in Brazil fourteen days after Andretti's runaway win in Buenos Aires. This time the Brazilian Grand Prix took place, not at Sao Paulo's impressive five-mile Interlagos circuit, but at the brand new Circuit Internacional do Rio de Janeiro, a twisting autodromo complex situated some 20 miles or so south of Rio near the town of Jacarepagua. Conditions were insufferably hot for most pale-skinned Europeans for the venue is the only Formula One circuit currently situated in the Tropic proper (Rio is slightly north of the Tropic of Capricorn!).

As far as the cars were concerned, the field was pretty well the same as that which raced in Argentina although the new Arrows organisation fielded a single car for Patrese, their number one ace Nilsson still not fully recovered from a recent operation. The Arrows FA1 came to Brazil completely untested although they did manage to arrange a brief burst along a local airport runway just to make certain that all its systems were working properly prior to official "testing for practice" on the Thursday before the race.

Wolf Racing had rebuilt their Buenos Aires spare WR1 to full 1977 specification following their disastrously uncompetitive showing in the Argentinian event when Scheckter could only finish ninth in WR4. The team's spare was thus rebuilt with the "old" bodywork, wings, short wheelbase and rollover hoop in the hope that they might be able to get some indication as to where their performance had gone since the end of last season. Lotus once again installed their Getrag-developed five speed gearbox in Peterson's 78/2, this now beefed up with revised components following the selector trouble at Buenos Aires, both Ensigns now had nose mounted oil coolers fitted with piping running outside the cockpit, and Pironi's Tyrrell had been updated to the latest suspension specification which now left it the same as Depailler's sister car.