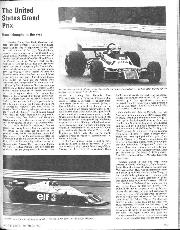 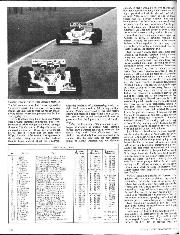 Hunt triumphs in the wet

The Formula One circus moved to North America at the end of September for the 15th and 16th rounds of the 1977 World Championship contest, made up of the United States Grand Prix at Watkins Glen on the weekend of October 1st/2nd and the Canadian Grand Prix at the Ontario circuit of Mospot Park on the weekend of October 8/9th. The two organisers shared the cost of transporting the Formula One cars across the Atlantic and, for the first time, in 1977 the "two race series" kicked off with the American event. Once the first race was finished a fleet of giant articulated long-distance lorries were loaded up with all the Grand Prix machine, and transported off to the next event.

Obviously local interest at Watkins Glen was centred round Italian Grand Prix winner Mario Andretti and his Lotus 78, not merely because he has been a regular winner this season, but because of the prospect of a "home" driver winning at Watkins Glen for the very first time. For Andretti, the race was similarly important for he not only wanted to win, but he wanted to achieve an unnofficial "double" and add victory at Watkins Glen to his early triumph this season at the "round the houses" United States Grand Prix West at the Californian city of Long Beach.

However, away from Andretti and the other regular competitors, there were one or two car and driver alterations to note at Watkins Glen. To start with Andretti's team-mate Gunnar Nilsson was using Lotus 78/4, the chassis that has served as the spare car at most of the previous races, while the Brabham team had brought out BT45/6B for Watson to use after the Ulsterman had badly damaged the monocoque of BT45/5B in his kerb-jumping incident during the opening laps at Monza. There was a new Shadow DN8/6A to replace Patrese's car (also damaged at Monza), but the young Italian driver was committed to driving his Formula Two Chevron-BMW in a European Championship round at Estoril in Portugal, so the team hired Jean-Pierre Jarier for the weekend. Jarier, a former full-time member of the Shadow team up until the end of last season, was available as the ATS Penske team didn't make the trip to North America and as he was a known quantity to the Northampton-based organisation he seemed just the man for the job. Many people registered some surprise that the job didn't go to Shadow director Jack Oliver, particularly in view of his competent "stand-in" performances in the Race of Champions and at the Swedish Grand Prix, but the Englishman didn't make the trip to North America owing to "business commitments" at home in London.