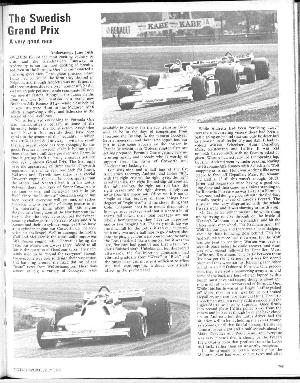 Sweden is not the most exciting country to visit, and the Scandinavian Raceway at Anderstorp is not the most exciting of circuits, but even so the Formula One "circus" enacted a cracking good race. Throughout practice Team Lotus had continued the form they showed in Belgium, and though Andretti was not fastest in all three sessions due to a tyre "nonsense", he did end up on pole position, while team-mate Nilsson was seventh fastest. Alongside the Lotus on the front row was John Watson in a brand new Brabham-Alfa Romeo BT45; while close behind in row two were Hunt in the McLaren M26 which is improving visibly, and Scheckter in the second of the Wolf cars.

Not so long ago everything in Formula One was "democratically equal", as some of the hierarchy behind the Constructors Association would have it, but recently there have been chinks in the armour of this "equality" which was artificial and dull anyway with the result that the overall scene has been changing for the good. Practice in Sweden made it blatantly obvious that those dull days are over and Formula One is getting back to being a serious activity once again; almost Grand Prix. The first signs were the appearance of three special Cosworth engines, a little while ago, one each for Lotus, McLaren and Tyrrell: now there is a special Cosworth engine that is a bit more special than the others, and Andretti had it in his Lotus. Between these two types of Super-Cosworth is yet another one, and Scheckter had it in his Wolf. Once the "ultimate" Cosworth engine has been proved, everyone will get one, or rather everyone who is capable of doing justice to it. The interesting thing about all this engine development being done at the Northampton factory is that the object is to combat the ever-increasing challenge from Ferrari, Matra and Alfa Romeo and their 12-cylinder engines (BRM have a 12-cylinder engine but Cosworth do not consider it a challenge). Well in amongst the Lotus, Wolf and McLaren is the continually improving Alfa Romeo engine, while Ferrari is losing the pace, but Matra are always there. Added to all this is the question of Goodyear tyres. They certainly used to be "equal for everyone" though not everyone was able to design their suspension and handling around the fixed datums of the "issue" tyres from Wolverhamptom. There was almost as big a variety of Goodyear tyres available in Sweden for the top teams as there used to be in the days of competition from Firestone and Dunlop. At the moment Goodyear have a monopoly, and there is no opposition, but just in case some appears on the horizon in France (Michelin), the Wolverhampton firm are getting prepared. Formula One is getting very interesting again, and nobody who is worthy of support from the firms of Cosworth and Goodyear are lacking it.