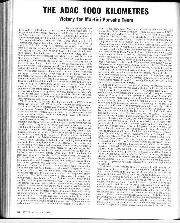 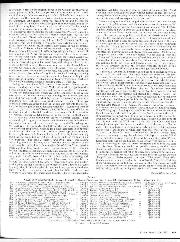 The ADAC 1,000-kilometre race was held only two weeks after the Targa Florio, so the Porsche teams were still licking their wounds and the Alfa Romeo team was very confident. As at the Targa Florio the Porsche factory loaned 908/03 models to their two main customers, the J.W. Automotive-Gulf team and Hans-Dieter Dechent's Martini International Racing team, but whereas the factory had been in charge in Sicily the two separate organisations had control once more, with Porsche staff members in close attendance and for the most part looking very worried, the black day in Sicily still hanging heavily over their heads.

The Gulf team had two brand new 908/03 cars, for Rodriguez/Oliver and Siffert/Bell and when they arrived for practice they were far from correctly adjusted for the circuit and throughout practice presented niggling little faults that kept everyone busy and the drivers far from happy. Such things as the gearbox sticking in fifth gear, the brakes feeling peculiar and the handling not creating a great feeling of confidence. The Martini team had two of the Targa Florio cars, one of them looking a bit tatty after an off-the-road excursion during pre-practice testing. They were driven by Elford/Larrousse and Marko/van Lennep, the last-named substituting for Redman, who was not recovered from his Targa Florio accident. Martini also entered their own 908/02 model for the Princes of Hohenzollern and Bayern to drive, but it got no further than the first practice, when Hohenzollern put it off the road!

One of the Martini team Porsche 917 coupés was entered but withdrawn before practice began as van Lennep, who was to have driven it was given a place in the 908/03 team; his co-driver, the Austrian Rudi Lins, was found a seat in an old 910 Porsche with Sepp Greger, the 56-year-old German still driving hard enough to embarrass a lot of newcomers in the amateur ranks.