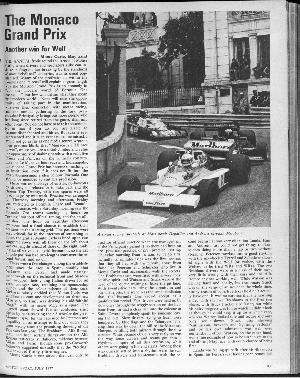 Another win for Wolf
Monte Carlo, May 22nd

There was no shortage of entries, no boycotts by drivers, no reluctance to take part and the chosen Top Twenty, with two spares were all ready to go by mid-week. Practice was arranged for Thursday morning and afternoon; Friday was restricted to Formula Three and Renault racing practice while Saturday morning saw the Formula One teams wasting 1 ½ hours on “testing” without official timing, and for an all-too-short one hour on Saturday afternoon everyone had a final chance to establish their position on the starting grid. The positions were very critical, for in the interests of something or other, the grid at Monte Carlo is lined up in two staggered rows, with all those on the left about two car lengths ahead of those on the right, making an effective 1 x 1 grid formation, so the car on pole position had two-lengths start over the second fastest and so on.