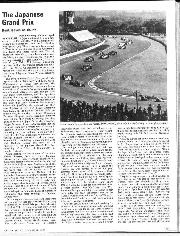 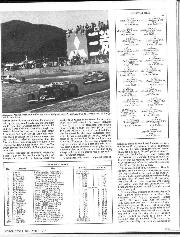 Although the Japanese Grand Prix is a new event to the Formula One World Championship series, a race under that title was first held as long ago as 1963. Then it was won by a certain P. Warr at the wheel of one of Colin Chapman's little Lotus 23B sports racing cars. That of course was Peter Warr, then a keen amateur racing driver, and more recently known for his role of team manager at Team Lotus and, from the start of 1977, Walter Wolf Racing. In 1963 the race was held at the Suzuka circuit and now, after two World Championship races at the Mount Fuji Speedway, there is every indication that the 1978 Japanese Grand Prix will return to Suzuka.

The 1976 Japanese Grand Prix provided the organisers with a "fairy tale" finish to the World Championship as James Hunt snatched the drivers' title by the proverbial whisker and Mario Andretti put Chapman's Lotus team back in the winner's circle after a two year drought. This year things were different, and the organisers accepted that they were unlikely to be blessed with such a spectacular finale to the season as that enjoyed in 1976. However they were obviously, and justifiably, disappointed when they were deprived of 1977 FIA Points Champion Niki Lauda on the basis of the Austrian's personal whim, in addition to former Champion Emerson Fittipaldi whose Brazilian financed team felt that they would be wasting their time going all the way to Japan for another disappointing performance. It was understandable that the Fittipaldi team saw a programme of testing in Britain as a much more sensible alternative to competing in japan and they were only exercising their F1 Association right to miss one race "outside Europe". However, with the French Renault RS01 also failing to make the trip along with Hesketh Racing and most of the "privateers", the Japanese Grand Prix had something of a "Race of Champions" atmosphere about it!

Compensating for loss of some of the international interest, there were three Japanese drivers in the race. Noritake Takahara and Kazuyoshi Hoshino were entered at the wheel of locally built Kojima 009s, developments of the very promising 007 version driven by Hasemi in last year's race. The two Kojimas were fitted with Bridgestone tyres and Hoshino will be remembered as something of a "local star" in last year's Grand Prix, working his Tyrrell 007 up into third place during the race's early rain-soaked stages before being forced to retire for the unusual reason that his pit had run out of fresh Bridgestone tyres! Hoshino's old Tyrrell appeared again at Fuji in the hands of Kunimitsu Takahashi, this time running on Japanese Dunlop tyres.