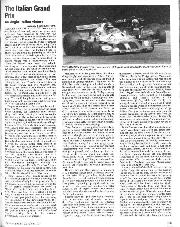 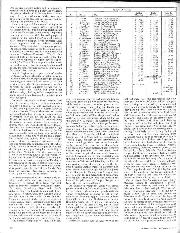 Despite annual rumours that the race must be moved eventually owing to various local objections, legal sanctions or whatever, the Italian Grand Prix at Monza continues to be the final race in the European Formula One season. Over the years we have seen the Milanese circuits change and evolve in many ways, going from road circuit to a combination of road and banked circuit and then, when the banking began to deteriorate and prove too punishing for the frail Grand Prix cars of the early 1960s, it reverted to a pure road circuit once more. For more than ten seasons Monza was a "slipstreaming blind" where the drivers' iron nerves and reliable machinery were more important than sheer skill; but that stopped in 1972 when two stupidly conceived chicanes were installed, one immediately after the pits and one at the Ascari curve. Fortunately, after a few years of silly spins, shunts and coming-togethers, the whole affair was redesigned for 1976. There's now all ess-bend at the Ascari Curve, and two relatively easy chicanes, one before Curva Grande and one before the Lesmo curves. Now the cars come rushing out of Parabolica, fan out across the wide start/finish straight and rocket away on full song. You could happily sit in the main grandstand today and imagine there were no chicanes at all for the Italian Grand Prix!

Despite rumours that there might be a third Ferrari at Monza for the young American driver Eddie Cheever, the Maranello team brought along their usual trio of 312 tranversales for Niki Lauda and Carlos Reutemann. It was left to the Brabham team to pander to their Alfa Romeo engine suppliers by installing local hero Giorgio Francia in BT45/1B in the first practice session, even though team chief Ecclestone had assured everybody the previous week that he would be running only two cars in the Italian Grand Prix. In fact, he was right to the letter of his assurance, because Francia was allowed only a handful of painfully slow laps before Stuck commandeered it after the clutch centre plate sheared on BT45/3B. Another local driver making his first appearance in Formula One at Monza was Lamberto Leoni, the Young Italian who recently won the Formula Two Misano race in a Chevron-Ferrari V6, and he was installed in the second works Surtees TS19, recently vacated by the disillusioned Schuppan. Similarly the McLaren team gave Formula Two "ace" Bruno Giacomelli his Formula One debut in M23/8, in much the same way as they recruited Villeneuve for the British Grand Prix. at Silverstone.