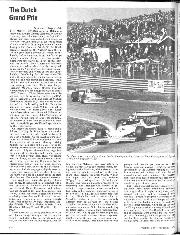 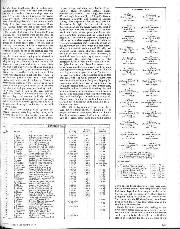 The Motor Racing scene in Holland is simple and straight-forward compared with some countries, there is but one circuit, the Grand Prix always takes place there and it doesn't change too much, so everyone turns up at the seaside resort of Zandvoort in a fairly happy frame of mind. Taking a lead from the British GP the Dutch organisers seeded out the "rabbits" from the entry and gave them a private test session on the Tuesday before the event, to sort out four to go forward into the official Grand Prix practice. There were nine entries listed for "rabbits day" and they included Brett Unger and Merzario, which seemed odd as they normally qualify well up among the "big boys" and Merzario was particularly incensed and refused to take part on the Tuesday. Brandishing the rule book of the FIA and with legal advice he got the special session made null and void after it had happened, so that the four who had qualified on the Tuesday had been wasting their time. These were Lunger (McLaren M23/14), Binder (Penske PC4/01), Henton (Boro 001 nee Ensign MN04) and Pilette (BRM P207/02). Three drivers were due to be left out, these being Ashley (Hesketh 308E/3), Villota (McLaren M23/6) and local lad Michael Bleekemolen (March 761/8) but with the cancelling of the result Ashley and the Dutchman appeared on Friday while Villota went off to another event. The Swiss driver Loris Kessel should have taken part with an old Williams car, but spent his time chasing John MacDonald of the RAM Racing team for some legal and financial matters left over from last season, and eventually successfully got MacDonald apprehended by the Dutch police.

On Friday the serious business began and it did not take long for Team Lotus to show that the Zandvoort circuit really suited the Lotus 78 and Mario Andretti. All the variables were finely tuned and in beautiful synchronisation and in a demonstration of smooth, flowing driving Andretti was in a class of his own. During the morning practice session he set a new standard with 1 min. 18.85 sec., the only driver to get into the 1 min. 18 sec. bracket, and the only one to even look like getting there. Hunt was driving hard, as always, but was nearly a second slower, with 1 min. 19.70 sec. and Reutemann had his Ferrari going well at 1 min. 19.74 sec., everyone else was over min. 20 sec. In the afternoon it was Andretti all the way again, slightly slower at 1 min. 19.07 sec., but still in a class of his own and there was a bit of a flutter about the place when Gunnar Nilsson ended up second fastest, at 1 min. 19.98 sec., no-one else getting below 1 min. 20 sec., though Hunt was next fastest with 1 min. 20.13 sec. At the end of the day the order was Andretti, Hunt, Reutemann and Nilsson with all the rest of the usual front-runners like Lauda, Laffite, Scheckter, Watson and Peterson wondering what they could do about the two Lotus cars. Others who were running strongly were Jones (Shadow DN8/4A), Regazzoni (Ensign MN06), Tambay (Ensign MN08), Stuck (Brabham BT45/3B) and Depailler (Tyrrell P34/7).