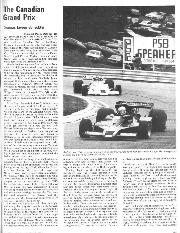 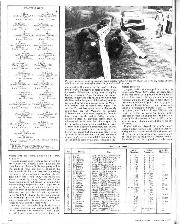 Although plans are afoot to transfer the Canadian Grand Prix to a makeshift "road" circuit round the Canadian National Exhibition Centre in the middle of Toronto, this year's race took place in the rural surroundings of Mosport Park some 7-miles away from the centre of the City. The cars came straight up from the United States Grand Prix at Watkins Glen and many teams faced a busy week rebuilding damaged machinery from the American race.

March Engineering were faced with a problem after lan Scheckter crashed 771/2 beyond immediate repair at Watkins Glen, so they arranged to fly out the monocoque of 771/1 round which the mechanics built a fresh car for the South African to drive in Canada. Similarly Jones' damaged Shadow was rebuilt round the repaired monocoque of Patrese's DN8/5A which was damaged at Monza, but the Brabham team simply transferred Stuck over to their spare BT45/1B after he damaged BT45/3B in the American race, keeping their fingers crossed that they would not be requiring the luxury of a spare chassis.

Aside from the technical stuff, Mosport was the scene of a great deal of "political activity". To start with the Ferrari team had originally entered three cars for the Canadian Grand Prix, the third one to be driven by French Canadian Formula Atlantic driver Gilles Villeneuve who made his Formula One debut driving a McLaren M23 in this year's British Grand Prix. However, Lauda got involved in a very big row with Ferrari following the departure of his mechanic Ermanno Cuoghi at Watkins Glen; Coughi had expressed his desire to move with Lauda to Brabhams, so he was suspended immediately mid-way through the United States Grand Prix weekend. Lauda was also very cool towards the idea of the team running three cars at Mosport, he eventually informed team manager Nosetto that he would not be taking part in the race, leaving Villeneuve and Reutemann to uphold the Italian team's reputation.