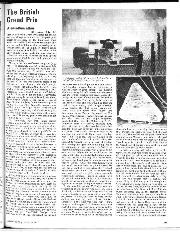 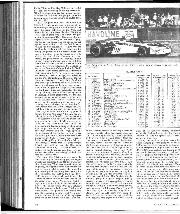 The 1977 British Grand Prix lasted for exactly one hour thirty-one minutes and forty-six point nought-six seconds, on the high-speed track round the outside of Silverstone aerodrome. Just over one and half hours of motor-racing at an average speed of 130 m.p.h. It doesn't sound much, but the work and effort that led up to this ninety-minute climax made the most hardened enthusiasts wilt a bit. Whether the build-up and preparation justified the end result is a matter of personal opinion.

Although the race itself started at 3 p.m. (2.59 p.m. to be absolutely precise) on Saturday July 16th, activity began on July 6th when the Formula One Constructors' Association took over Silverstone for a day of testing preparatory to the official practice beginning on July 14th. They were also there on July 7th, still testing, and the outcome of all that was Andretti recorded the best lap in 1 min. 18.54 sec. with the Lotus 78, with Watson (Brabham-Alfa Romeo), Hunt (McLaren M26/2) and Lauda (Ferrari) a half-a-second or more behind. It was all unofficial and strictly "closed shop" for the Ecclestone/Mosley club, but strangely the works Renault was there; Renault-Sport which is the racing section of Regie Renault suddenly found themselves part of the Constructors' Club! Naturally everyone was sniffing round the bright yellow turbo-charged 1 1/2-litre V6 Renault car, with its Michelin tyres, but they didn't sniff for long because the engine broke itself. However, Jean Pierre Jabouille got in a best lap of 1 min. 21.00 sec.

On Wednesday July 13th things started happening again when the RAC invited the non-members of the Constructors' Association along to Silverstone to indulge in a day of trying to qualify to be allowed to try and qualify for the Grand Prix. This day, in which there were two sessions of an hour-and-a-half each, was banned to the members of the Constructors' Association and was known as "rabbits' day". Seventeen entries were accepted, of which the best five were to be allowed to return for official practice for the Grand Prix. As it turned out there were three non-starters, and of the remaining fourteen two of them eliminated themselves with accidents, one light and the other very serious, and of the twelve that were left seven of them were so competitive and close that the RAC told Mr. .Eeclestone that he should allow all seven, and not lust the best five, to play with the big boys on Thursday, and this was done. A detailed account of "rabbits' day" will be found elsewhere.