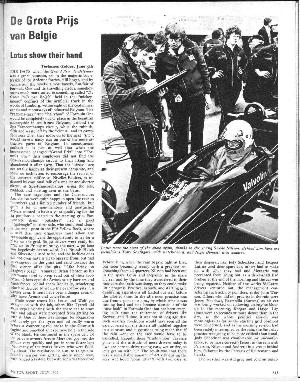 The Days when the Grand Prix de Belgique was a great occasion, set in the majestic countryside of the Ardenne forests, still linger, and by comparison the rowdy, almost bawdy, fun-fair of Formula One and its travelling circus, somehow seems much more suited to something called "De Grote Prijs van Belgie" held in the "mickey-mouse" confines of the artificial track in the woods of Limburg, within sight of the coal mines, canals and motorways of industrial Belgium. The "razz-ma-tazz" and "ballyhoo" of Formula One would be completely out of place in the beautiful countryside in south-east Belgium, around the Spa-Francorchamps circuit, while the rubbish, filth and waste left by the "circus" and its campfollowers when they move on to the next "site", would leave a nasty scar on one of the more attractive parts of Belgium. In consequence, perhaps it is just as well that when the businessmen changed "Grand Prix" into "Formula One" their employees did not find the Spa-Francorchamps circuit to their liking and abandoned it after 1970. That the "circus" are not totally happy at their present camp-site, and show no inclination to encourage the revival of the concrete edifice at Nivelles-Baulers, is indicated by continual talk of a smaller and shorter circuit at Spa-Francorchamps, using the pits, paddock and starting area as the basis.

The race organisers and the Constructors Association were quite happy to open the race to "members and a limited number of friends" but quite a lot of non-members and unattached drivers wanted to have a go at qualifying for the 24 positions allocated to the starting grid.