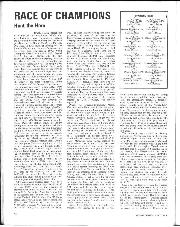 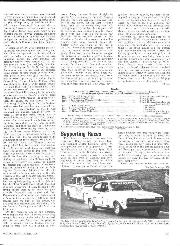 For those of the estimated 35,000 who were fortunate enough to penetrate through the gates and barriers and past the Securicor guards on duty at Brands Hatch, the Formula One paddock held much of interest for the Race of Champions, the first European race for Grand Prix type cars in 1976. World Champion Niki Lauda had a 1976 Ferrari flat-12, designated 312T2, with the new bodywork which enclosed everything between the wheels and had the air intakes for the 12-cylinder engine sunk into the cockpit sides and a low head fairing behind the driver's head. This was number 025 in the current 312 series and had normal independent rear suspension, not the experimental de Dion layout. Scheckter had his usual Tyrrell 007/6, straight back from the South African OP like many of the other competitors. While most members of the Formula One club were only allowed one entry, Team Lotus were permitted two for some obscure commercial reason and they had the two Lotus 77 models making their first appearance In their home country. The Swede Nilsson was driving 77/1 and Bob Evans 77/2, both carrying the soon-to-be-outlawed tall airboxes over the engine, the airbox, engine cover and cockpit surround all being in one large glassfibre moulding; somewhat inconvenient if you wanted to have a quick look down the inlet trumpets. Another brand new sight for British eyes and ears was the lone Brabham BT45/I with flat-I2 Alfa Romeo power, driven by Carlos Pace, the Italian engine no longer having two enormous megaphone exhausts out the back, but instead two small-diameter tail pipes. It was running on Italian SPICA fuel injection and gave a lot of trouble throughout the meeting. Brambilla was driving his orange March as usual, while his new team-mate Ronnie Peterson stood around idly, but James Hunt was anything but idle, having two McLarens at his. disposal, M23/8 and M23/6, and continual engine trouble kept the blond Englishman on his toes, walking or running back to the pits to change cars. Australian Formula Three driver Larry Perkins was to have had a chance to try Formula One, with a BRM, but it never materialised. The Shadow team were naturally using their "local lad" and last year's Race of Champions winner, Tom Pryce, with two cars at his disposal, DN5/5B and DN5/4A, and he needed them badly as he suffered like Hunt during practice with Cosworth engines disintegrating behind him.