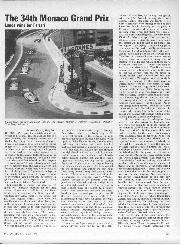 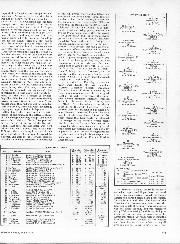 If you can accept a scratch round-the-houses as a Grand Prix, the Monaco race is a great leveller, for everyone arrives on the Wednesday before the event on equal terms. There is no possibility of pre-practice testing or tyre-test sessions, or even the opportunity to drive round in a touring car, for in places the route used for the racing circuits is in opposition to the normal traffic flow, as in the Casino Square, for example. You could walk round the circuit beforehand but the perspective from eyes at 5 ft. 6 in. above ground level is very different from the eyes of a driver in a Formula One car where they are barely two feet off the ground. If you made a lap on your hands and knees, to get the correct view of everything, you'd probably be thrown in gaol before you could explain that you were not drunk, especially in Monte Carlo.

Consequently everyone was keen to get going on Thursday morning for the first session of one and a half hours, and Hans Stuck was the first away after lining up at the paddock exit before most of the others had got their engines warm. There were two modifications to the circuit since last year, in the form of artificial corners, though no-one seemed quite clear as to their purpose and no-one seemed to know who had planned them or even asked for them. There was a suspicion that they are a throw-back to the days of Stewart and Hulme, when they were shouting on behalf of the GPDA, and were things that did not get done at the time. Whoever thought up the ideas he was not at all popular with the 1976 crop of Formula One drivers, which is probably why he did not reveal himself. In the centre of the wide space at the apex of the fast right-hand sweep uphill at Saint Devote corner, a traffic-island had been constructed, with wide bevelled kerbs so that instead of passing the pits on the left of the road and taking a fast line through the right-hand bend and up the hill, you now had to keep to the right and brake heavily before turning slightly left and then take a right-hand hairpin, starting the hill almost from rest. It also meant that anyone leaving the pits stood a good chance of getting punted up the backside, and during the first hour there were some pretty hair-raising nearmisses. The other new corner was before the pits straight, where the cars leave the "Mickey Mouse" section on the harbour front and previously accelerated hard over a slight brow on a fast right-hand curve. Now they had to take a short piece of straight, turn tightly round a right-hand bend and then take a left-hander to join the road past the pits. As all the new corners were edged with FIArecommended wide-bevelled kerbs everyone was bouncing across them, which not only strained suspensions and drive-shafts and gearboxes but threw the cars off line in a most unruly fashion. Surprisingly few drivers seemed able or capable of placing their cars accurately enough to avoid bouncing over the kerbs, while some obviously drove over them deliberately.