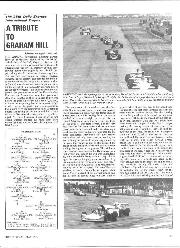 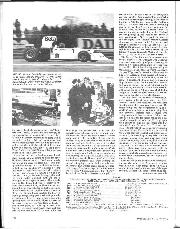 The annual Springtime motoring garden party at Silverstone, organised by the BRDC with the help of the Daily Express, this year took on a new role, as it was named the Graham Hill International Trophy, in memory of that very popular figure who tragically lost his life last year, along with five members of his racing team. The two-day programme of events covered numerous races, displays and parades and included an innovation for the paying customer in that he (or she) was allowed access to the pit lane for a limited period of time on Sunday morning before all the activity began. This allowed people to approach the precious jewels of the Formula One Constructors Association, who had graciously allowed a handful of their members to perform before the public in return for a fee of £70,000, so it was not surprising that it cost upwards of £7 to take part in the garden party as a spectator. For a mere £175 the amateur world of Clubmans Sports Car racing put on an uninhibited 12-lap thrash on Saturday afternoon, which they all enjoyed. At times I wonder if our priorities are wrong. Ferrari changed his mind some days before the event and withdrew his single entry of Niki Lauda.

The main event of the weekend was the Formula One demonstration of Grand Prix driving, which produced a popular win for James Hunt in a McLaren, and while leading for all 40 laps he notched up a new outright lap record for the revised Silverstone circuit with its fast ess-bend on the apex of Woodcote corner. For the very first time the McLaren raced with its new compressed-air starter motor fitted, this allowing a much smaller electrical battery to be used for the other ancillaries. Previously this new starter mechanism had only been tried in practice, the worry being not so much in starting the car on the grid, but restarting out on the circuit if the driver should make an error and spin to a stop, stalling the engine in the process. The McLaren team need not have worried for Hunt never put a foot wrong and though his win was unchallenged, only Brambilla being able to keep him in sight, he was not hanging about as evidenced by his new outright lap record of 1 min. 18.81 sec. 133.93 m.p.h. (215.54 k.p.h.). The McLaren was running with its six-speed McLaren/Hewland gearbox, as usual. Brambilla, in a pure white