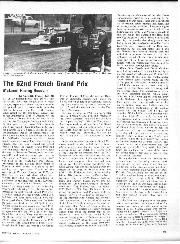 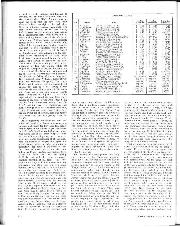 It is interesting how quickly time passes and how soon. we get used to major changes, especially if there is no relaxation in the general pace. It seems only yesterday that we bemoaned the loss of the Reims-Geux circuit for the traditional Grand Prix of the Automobile Club of France, yet the last French Grand Prix to he run in the heart of the Champagne country was in 1966, the first year of the current 3-litre formula and it was won by Jack Brabham in his own car powered by a V8 Repco engine. In 1968 the traditional title of the Grand Prix of the Automobile Club of France disappeared when the Federation Francaise du Sport Automobile took over control of motor racing in France. The race was renamed the Grand Prix of France (or French Grand Prix) and was numbered "the First". The FFSA took the race to Rouen-les-Essarts, then to Clermont-Ferrand and our next upset was in 1971 when the "Fourth French Grand Prix" was held on the newly-built Paul Ricard Autodrome in the hot and dusty South of France. A brief return was made to the exciting and spectacular Circuit of the Auvergne at Clermont-Ferrand for 1972, but that. was the end. All those taking part decided they liked the fiat Autodrome in preference to the challenge of the Auvergne mountains, so Clermont-Ferrand was denounced as being unsafe and not in keeping with "modern thinking". By this time we had arrived at the sixth French Grand Prix, even though to British eyes the French Grand Prix had been run since 1906, and, in fact, was the original Grand Prix motor race. In 1974 the race was held at the tiddly-little unfinished Dijon-Ptenois circuit and the FFSA and the Automobile Club of France came to an agreement that the two titles of the race Should be combined. They took the numbering of the races run by the ACF and the title of those run by the FFSA and in 1974 we had the 60th Grand Prix of France, even though the 1973 race had been the 6th Grand Prix of France. Holding the race at Dijon was an unpopular mistake and though the FFSA wanted to return to Clermont-Ferrand they were over-ruled by vested interests and the FIA and the race returned to the Paul Ricard Autodrome.

So here we were in 1976, ten years alter the real French Grand Prix and "racing in the Grand Manner" had died the death, at the "superb facility" called the Paul Ricard Autodrome ready to witness the 62nd Grand Prix of France. Almost unbelievably it was the fourth time the race was held at Paul Ricard, which must prove that you can get used to anything if the alternative is nothing.