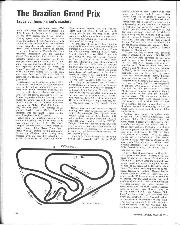 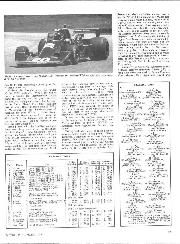 The 1976 Grand Prix season started on a difficult note in January in the same way as the 1975 season ended last October. Having agreed that their race would take place, the Automovil Club Argentina abruptly announced the cancellation of the Argentine Grand Prix, due to take place in Buenos Aires' Parc Almirante Brown on January 11th, thus throwing the Formula One Constructors' Association and the Brazilian Grand Prix organisers into a state of considerable turmoil. So enormous are the air transportation costs for upwards of 20 Formula One cars that both Brazil and Argentina regularly divide this bill when the "circus" goes off to South America. Thus if the Brazilians wanted their Grand Prix, they were faced with the entire bill for airfreight in addition to the much increased prize fund.

Fortunately the Brazilian organisers didn't have to deal with either the economic problems or the political unrest which currently beset their South American neighbour and the race took place as planned on January 25th. For the fourth consecutive year, Sao Paulo's impressive 4.9-mile Interlagos circuit hosted the Grand Prix and more than usual interest attached to the Copersucar-financed team run by Wilson Fittipaldi Junior as they had now secured the services of his younger brother, twice World Champion Emerson, who has signed to drive for the team throughout the 1976 season. Apart from this amazing switch of allegiance on Fittipaldi's part, the Brazilian Grand Prix marked the start of the 1976 season "proper" for such teams as Martini Brabham, Ligier Gitanes, John Player Team Lotus, Frank Williams, Penske Racing and March Engineering, all these teams arriving fully prepared with the cars they intend to use in all 15 races on this year's Championship calendar. Ferrari, McLaren, Shadow, BRM1 and Elf Team Tyrrell were really taking part in the 15th race of the 1975 season, all relying on well-proven cars which they raced all through last year, albeit somewhat modified in many areas.