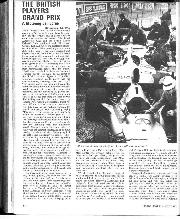 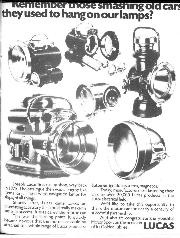 An evening out at the circus is always pleasant, a full day at the circus is really enjoyable, but three whole days of circus is almost more than anyone can stand. The Royal Automobile Club and the British Racing Drivers' Club combined with Silverstone Circuits Ltd. and put on the greatest spectacular of all time. With practically every motor club in the country providing marshals and helpers the RAC were able to take the credit for organising this mammoth motoring jamboree, the greatest, most spectacular, gigantic, colossal, never-seen-before, three-day circus in the green fields of Silverstone; and it was a sell-out, with the spectator attendance at such astronomical figures that the quoted 77,000 must surely have been an "accounts estimate" for the tax man. In the centre of the airfield was the biggest and friendliest motoring-orientated garden-party that has ever happened, involving more than 10,000 "in" people, and it was such a gathering that there was hardly time to look over the fence to watch the super circus acts that were being performed for the benefit of the paying customers, to say nothing of looking up in the sky, for it was all happening up there as well. The feeling was that there must have been someone who wasn't at Silverstone, but it was very difficult to think of anyone. As soon as you did, there he was walking through the crowd, and people were continually saying "I'm sure I saw so-and-so just now", to which the answer was "indeed you did". If ever there was a dull moment pending during the three days of Thursday, Friday and Saturday the heavens would open, thunder would roar and lightning flash, and Silverstone would disappear under torrential rain. It really was the greatest spectacular of all time, making Le Mans and the Nurburgring look like rather dull old ladies' tea parties. There was something interesting or exciting taking place the whole time and I felt very sorry for some of the long-suffering enthusiasts who were helping on the administration side of the show, shut away in an office or in charge of a machine to keep it all going, and could only hear it all and not see anything. At least those manning key posts on gates or barriers to control the movements of people and vehicles had an ever-changing scene, while those who were on duty around the arena, soaked through one moment, baked dry by a blazing sun the next, and lifting the performers out of the catch-nets the next, were seeing all the action.