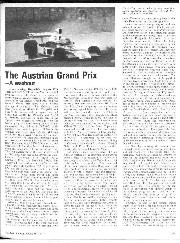 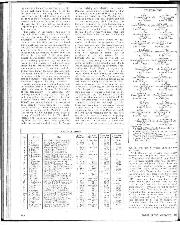 The entry list for the Austrian Grand Prix was very full, almost to the point of overflowing as regards drivers, but after the debacles of the British Grand Prix and the German Grand Prix there was a distinct shortage of racing cars. The McLaren team were reduced to M23/9 for Fittipaldi and M23/6 for Mass, with no spare car, and Lotus had 72/R9 for Peterson and 72/R8 for Henton, also with no spare car. In the Tyrrell team Scheckter's wreckage from the Nurburgring has been rebuilt around a new monocoque tub, making it 007/6-3, while Depailler was still happily in 007/4 in its original and virgin state. Unlike McLaren and Lotus, the Tyrrell twins did have a spare car, number 007/5. Also still enjoying a spare car luxury, and needing it, was the Brabham team. Reutemann had BT44B/1 as usual, and Pace had B4, but they both had recourse to using the spare car, B3, during the meeting. The four March cars at this race were as used in Germany, with the same driver/car combination; Brambilla 751/3, Stuck 751/2. Lombardi 751/1 and Donohue 751/5. The Scuderia Ferrari did another shuffle on their set of cars, with Lauda in 022, Regazzoni in 024 and the reserve car was 023, The BRM team were back with their usual pair of cars and it was hoped more power and more reliability, with Evans aiming to use P201/05 as the race-car. The Shadow team had more cars than they knew what to do with, Pryce as usual being in DN5/2A with 3A as the spare car, while Jarier had the brand new Matra-powered car DN7/1A. His usual car, DN5/4A was standing by ready for use but the Frenchman was not interested in it, putting all his efforts into the new car.

After his brief flirtation with Team Lotus, John Watson was back with the Surtees team, in TS16/05-4, and Frank Williams had hired out a car to the Swiss amateur driver Joseph Vonlanthen, this car being a rebuilt version of FW/03, which Ashley crashed at the Nurburgring. The Williams team had "found' another monocoque tub in the stores and used it as the basis of the rebuild. creating FW/03-2. Laffite as usual had FW/04. In the Hill team there was a shortage of cars as GH1/1 was a write-off after Brise had crashed at the Nurburgring, so he took over the latest car GH1/4. Rolf Stommelen was making his return to the team and took over GH1/3, so that Alan Jones' temporary contract terminated as was agreed from the start. The Hesketh team hired out their spare car 308/3 to the American driver Brett Lunger and Hunt retained 308/2, while there was no sign of the new C-type Hesketh. The Parnelli team had their usual pair of cars for Andretti and Wilson Fittipaldi had his latest Copersucar sponsored car. Morris Nunn had two entries, with Chris Amon returning to Formula One in MN/04 and Wunderink having another try in MN/02. To complete the list there was Harald Ertl, the Austrian journalist living in Germany, with the gold coloured Hesketh 308/1 and Tony Trimmer having another go with the rather sad Japanese Maki.