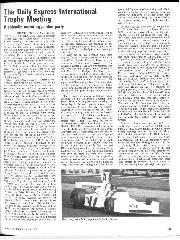 One good thing about British sponsors is that they expect their teams to appear at British meetings and because of this there were some hurried returns from Sunny South Africa on the part of Lotus, McLaren, Surtees and Lola and with them came Brabham, BRM and Hesketh, to take part in the 40-lap Formula One race at the annual BRDC motoring festival at Silverstone. The oil crisis in the winter had caused the South African Grand Prix to be postponed until March 30th, a week before the Silverstone event, but air travel being what it is the closeness of the dates did not affect the entry. Ferrari and Tyrrell never had any intention of taking part.

The non-championship International Trophy, organised by the BRDC, has always stood on its own and now in its twenty-sixth year, the entry was well up to previous standards. It is this type of event which is needed for new cars to be made raceworthy and new drivers to gain Formula One experience; the principle of dropping a new driver and new car in at the deep end, straight into a World Championship Grand Prix, is very unsatisfactory and without events like the International Trophy newcomers would never get a chance to join in Formula One racing. Team Lotus used the event to try to get their 1974 car race-worthy, doing the reverse of what they did for the Race of Champions last month. They entered a Lotus 72 and turned up with a Lotus 76—JPS/9 for Peterson, but whereas the old car excelled itself at Brands Hatch (or was it the driver?) the new one did not behave at all well. March Engineering did a Rent-a-Car act with their Beta Tools sponsored car 741/2, with the Japanese driver Noritake Takahara at the wheel. The divided McLaren team produced a brand new car, M23/.7, for Hailwood and his Yardley sponsors, and Hulme had Texaco-Marlboro's McLaren M23/4 and Emerson Fittipaldi went home after the South African race. Reutemann also returned home, the Argentinian racing supporters waiting to welcome him in a big demonstration of wild enthusiasm over his victory in South Africa. The only Brabham competing was the updated BT42/3 for Robarts, the whole outing being a fairly leisurely one for the Brabham team. BRM. entered Beltoise with their new car, but it was Migault who took number 9 with a P160, accompanied by Pescarolo with a similar car. The Shadow team ran DN3/2A for Jean-Pierre Jarier and used the meeting to sign up Brian Redman for their second entry in future races. Team Surtees had rebuilt TS16/03, wrecked in practice at Brands Hatch, and again Jochen Mass was driving it, and Morris Nunn had two Ensigns in the paddock, his 1973 car and his 1974 car, the newer one having a slightly longer wheelbase achieved by angling the front wishbones forwards. In addition there are numerous small improvements and changes to the suspension mounting points and the geometry. Although von Opel was entered to drive one car, and a last-minute entry was made for Ganley in the second car, it turned out that Brian Redman drove both of them in practice, preferring the handling of the 1974 car even though he went slightly faster in the 1973 car, probably due to it having a better engine.