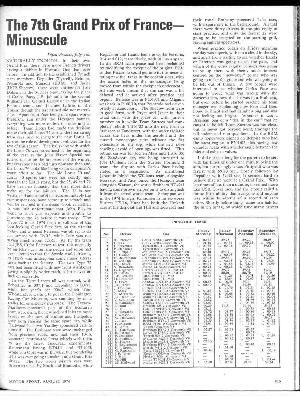 Dijon-Prenois, July 7th: Naturally enough, in their own Grand Prix, there were more French drivers having a dabble in Formula One than ever before. In addition to the established French team members, Depailler (Tyrrell), Beltoise, Pescarolo and Migault (BRM), and Jarier (UOP-Shadow), there were entries for Jose Dohlem in the Surtees team, taking the place of Carlos Pace, J-P. Jabouille in the second Williams car, Gerard Larrousse in the Italian Finotto team, and Jacques Lafitte in the Token, though the last named did not materialise. Apart from Pace being in a spare works Brabham, run under the Hexagon banner, everything was more or less in order and as before. Team Lotus had made the decision to use their old Lotus 72 cars as the first-string team cars, and to relegate the new Lotus 76 cars to the role of development vehicles for the rest of this season. The bally-hoo with which the Lotus 76 was introduced at the beginning of the year as the John Player Special has turned out to be the non-event of the winter, but everyone has a had turn now and then and the Lotus 76 looks like being Colin Chapman's worst effort so far. The old Lotus 30 and Lotus 40 sports cars were not exactly high spots in the Lotus story, but the 25, 49 and 72 have been so fantastic that they more than make up for the failures. The 76 is not written-off and some of its features, notably the rear suspension, have come up to scratch and will be retained in the design-book at Hethel. It was just unfortunate that John Players went to such vast expense and trouble to introduce the 76 before it was ready. The Type 72 in its 1974 form is still one of the best-looking Grand Prix cars on the circuits today, and as usual Peterson was all set to do his utmost with 72/R8, while Ickx was not saying much about 72/R5. As 1T the team had JPS110 for Peterson to test, this normally being Ickx's car, but the pedals and so on had been altered so that the Swede could drive it, as JPS/9 was undergoing sorne major alterations back at the factory. The two Type 72 cars had been fitted with new front wishbones giving a slightly wider track, a little over an inch on each side. In the Tyrrell team all was normal, with Scheckter in 007/1 and Depailler in 007/2, while last year's car 006/2, which Tom Wheatcroft is waiting to put in the Donington Racing Car Museum, was standing by on a trailer for emergency purposes.