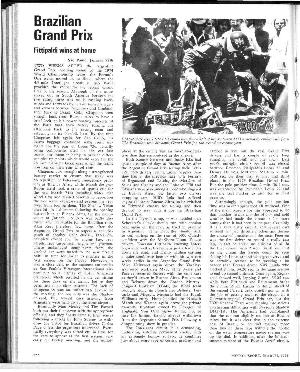 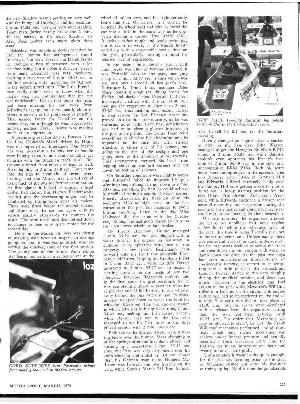 Two weeks after the Argentine Grand Prix, opening round of the 1974 World Championship series, the Formula One teams moved on to Brazil where the 4.9-mile Interlagos circuit at Sao Paulo provided the venue for the second Grand Prix of the season. Although all the teams stayed out in South America between the two races, there was rnuch rushing backwards and forwards by certain team managers and owners between Argentina and England, then back to Brazil, Colin Chapman went straight back from Buenos Aires to have a brief look at his power boating interests at the Paris boat show before turning his attentions back to his racing team and returning to its Norfolk base. By the time Chapman left again for Sao Paulo, his excess baggage contained some fresh uprights for his pair of Lotus 72s, actually being components used on the car last season, the intention being to provide different pick-up points which would cater for the 28 inch diameter Goodyears which the teams now run on their rear wheel rims.

Chapman also brought along a strengthened battery carrier to ensure that there was no repetition of Peterson's unnecessary problem at Buenos Aires, while March designer Robin Herd took a crate of spares out for the new March 741s including wider rear wheel rims and revised brackets to reposition the side water radiators and prevent the rear tyres from fouling them. The Shadow Team were left in a dilemma following the opening lap collision at Buenos Aires, for the monocoque of Jarier's DN1/6A was badly distorted and irreparable for the Brazilian race. Alan Rees therefore flew home after the Argentine Grand Prix to supervise the dispatch of another 1972 chassis, DN1/2A, complete except for the engine bay, rear wheels, rear suspension, engine and gearbox. These undamaged components from the crashed car were mated to the new "front half" in time for Jarier to practice in the first session on the Friday. However, it was a close call, as the customs authorities as Sao Paulo's Viracopos international airport put on a display of Latin American disinterest which resulted in the car sitting for three days on the tarmac before they permitted it to clear customs. The lack of co-operation was an unfortunate feature of the meeting, for not only was the Shadow delayed, but several cars arriving from Argentina were held up at the same airport.