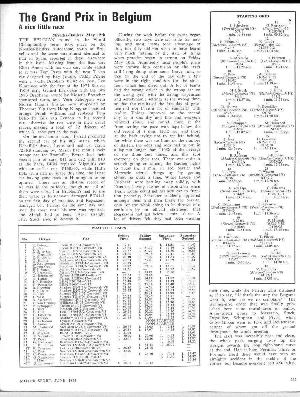 The Belgian round in the World Championship series took place on the NivelIes-Baulers Autodrome, south of Bruxelles and the scene was almost identical to that in Spain, reported in detail elsewhere in this issue. Missing from the lists was Chris Amon with his own car, while added to it was Tom Pryce with the neat Token car designed by Ray Jessop, Teddy Pilette with a works Brabham BT42 on loan, Leo Kinnunen with the first of the 1974 Surtees TS16 cars, Gerard Larrousse with the two 1973 Brabhams owned by Moser's Bretscher sponsored team, and Vern Schuppan with Morris Nunn's Ensign, now supported by Theodore Yip from Hong Kong, and painted orange. Frank Williams had replaced Tom Belso by Gijs van Lennep in his second car, otherwise the rest were in their usual paces, making a total of 32 drivers, of which 31 took part in the race.

On the mechanical front Tyrrell produced the second car of his 007 series, which Depaillier drove, Lotus still had last year's 72/R8 standing by, March had rebuilt their orange car for Brambilla, Ferrari had their second pair of cars, 011 and 012 with 010 as the hack, BRM replaced Migault's car with an earlier one, P160/05, while Hill's Lola team had no spare this time, the latest car having gone back to Huntingdon to be uprated! There was an all-time record of 41 cars in the paddock, though not all of them were used, but Brabham's had to use their spare as Reutemann damaged BT44/1 on the first day of practice, and Regazzoni damaged 011 Ferrari on the same day and used the spare until his own was repaired, and March had to bend 741/1 straight after Stuck tried to destroy it.