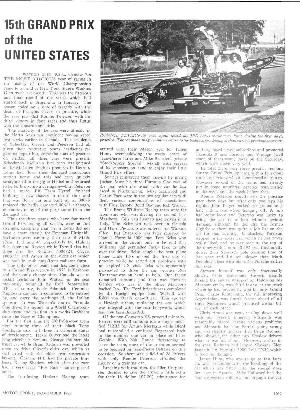 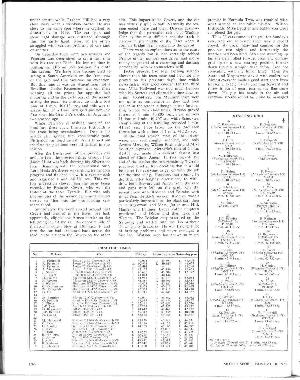 The most arduous year of racing in the history of the World Championship came to an end at New York State's Watkins Glen track last month. This was the fifteenth and final round of the series which had started back in Argentina in January. The season ended on a note of tragedy with the death of Francois Cevert in practice, while the race provided Ronnie Peterson with his third victory in four races and thus Lotus won the constructors' title.

The majority of the cars were already in the North American continent having raced two weeks earlier in Canada. The accidents of Scheckter, Cevert and Peterson had all given their respective teams headaches regarding repair but, come the start of practice on Friday, all three cars were present. Scheckter's McLaren had been straightened at the McLaren Engines premises in Detroit, Lotus had flown their damaged monocoque section home and this had been quickly straightened in the jig at Hethel and returned to be built up into a car again—thus Peterson had a spare. Elf Team Tyrrell finished building a new chassis in record time and that was flown out and built up as 006/3 replaced the badly damaged 006/1 although, of course, many of the parts came from the damaged car.

Thus the three teams, who have dominated Grand Prix racing all season, were at full strength, excepting that Team Lotus did not have a spare chassis for Emerson Fittipaldi. McLaren were running their trio of M23s (Nos. 1, 2 and 4) respectively for Hulme, Scheckter and Revson while Tyrrell also had three cars for Stewart (006/2), Cevert (006/3), and Amon in the older car which was back in snub nose/front radiator form.