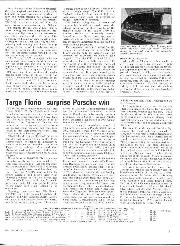 After fifty-six editions of the arduous Targa Florio, Sicily's Piccolo Madonie road circuit hosted what was touted as being the very last race over the open roads early in May. Next year, the CSI have not allowed it to be included in the International Calendar, the powers that be having run out of events to get excited about banning, and thus been forced to turn their attentions to the Targa Florio in order to keep occupied.

Thankfully, there are still several teams who consider that to gain victory in the World Championship for Makes, it's necessary to enter a punishing and hazardous race as the Targa Florio, although Matra and Gulf Mirage decided to keep away, feeling that either their cars or drivers would fail to stand the pace.

But as far as the 700,000 Sicilians (the number subsequently said to have watched the race) were concerned, all that was important was the presence of Ferrari and Alfa Romeo and they couldn't have cared less about the rest. Two flat-12 312Ps were on hand for Arturo Merzario and Sicily's hero Nino Vaccarella (winner in 1965 on Ferrari and 1971 on Alla Romeo), whilst the Maranello team leader Jacky lckx was making his debut on the circuit with Brian Redman in the second car.