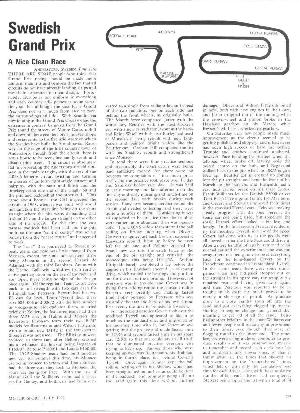 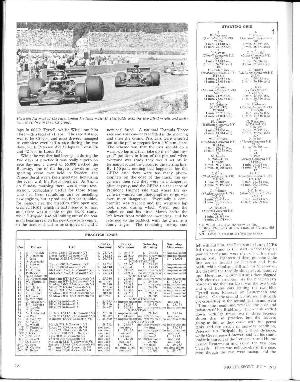 There are some people who think that Grand Prix racing should be made more uniform than it is and bemoan the fact that all circuits do not have aircraft landing strips and motels incorporated in their design. Fortunately, Europe is not uniform in everything and each country still possesses some variation, so that although the cast for a Grand Prix does not vary much from race to race, the surroundings still do. With Scandinavia now joining in the Grand Prix circus we had the extremes in contrast by going from the Grand Prix round the streets of Monte Carlo, uphill and downhill between the hotels, houses, shops and restaurants, to the flat, arid waste on which the Swedes have built the Scandinavian Raceway on the edge of the little country town of Anderstorp, though from the circuit there is not a house to be seen, just sandy scrub and distant pine trees. The circuit is absolutely flat, incorporating the Anderstorp airfield runway in the main straight, with the rest of the 4.018-kilometre circuit twisting and turning in a series of uniform right-angle corners and hairpins, with the start and finish and the timekeepers at one end of the wiggly bit and the pits and paddock at the other end. This came about because the CSI inspected the circuit in 1968, when it was built, and would not sanction the start line being on the short straight where the pits were, demanding that it should be on the longer straight on the other side of the circuit. By this time the vast tarmac paddock had been laid and the pits built, so the race "control centre" was set up remote from the "nerve centre" and it seemed to work.

The "cast" that journeyed to Sweden by boat, plane and road was little changed from Monaco, except for some non-starters, these being Merzario in the second Ferrari, de Adamich with the third Brabham, Amon with the Tecno, Galli who withdrew from further active participation on the eve of the race, and von Opel, there being no sign of the Ensign once again.