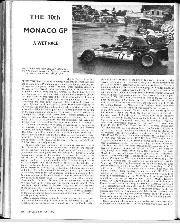 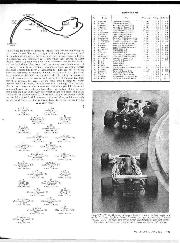 With the race at Monaco taking place only two weekends after the Spanish Grand Prix there was not much time for any startling new changes to take place, so that the scene when practice started at Monaco on Thursday afternoon was very similar to that which we saw at Jarama. Those teams that had returned en bloc to their factories were back again, renewed and fresh, while those who stayed at Jarama for preparation and then trekked direct to Monaco all arrived in good time, thought not all in good order for the John Player/Lotus team transporter had been badly damaged when a Spanish driver had crashed head-on into it north of Barcelona. Hastily-hired vans had to be acquired and everything unloaded and taken to Monaco in a bit of a shambles. With the Indianapolis 500-Mile race qualifications starting on the same weekend as the Monte Carlo race, there were some small, but significant changes in the overall scene. Ferrari entered only two cars, for Ickx and Regazzoni as Andrctti was committed to Indianapolis, and the McLaren team had got themselves well organised, dividing their forces to allow Revson to concentrate on Indianapolis and Hulme to concentrate on Monaco, so that neither of them had to get involved in tiring transatlantic flights. For this race Revson's place was taken by Redman, straight from his victorious drive at Spa. The BRM team did a minor shuffle with their motley collection of drivers, substituting Marko for Soler-Roig but keeping their strength up to five. Otherwise, everything was as it was in Spain, even to the non-appearance of the Tecno flat-12, though this time both Galli and Bell had been tentatively entered.

The most important happening was a complete reconstruction of the chicane onto the harbour quayside and of the pit and paddock layout. Previously the temporary paddock was set up in a large garage just behind the starting-line area, but now it was moved to a large underground garage on the sea front far beyond the circuit at the opposite end to the starting line, and the pits were moved from the central island on the up-and-down leg to the Gasometer hairpin, to the harbour quayside and the old chicane at the foot of the hill after the tunnel now became the entrance to the pit road. The circuit itself continued straight on from the foot of the tunnel hill along past the pits and joined the harbour quayside by way of a very tight single-car chicane very close to the Tabac corner. Exit from the separated pit lane was by a gate at the new chicane and this was controlled by a red and green light signal which was operated by Vic Elford suitably placed on the apex of the chicane so that he could see into the pit lane and right back up the course almost to the exit from the tunnel. This new layout was first-class but for one thing, and that was that none of the paying spectators could see what was happening at the pits, and a lot of people had spent a lot of money for seats in the grandstands by the starting line for the express purpose of watching the pits activity especially during practice.