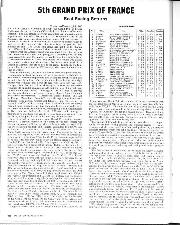 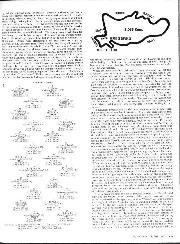 After a certain amount of doubt the Grand Prix of France finally took place on the Circuit of Charade, in the hills above Clermont-Ferrand. The CSI circuit safety sub-committee kept muttering about improvements and safety barriers and the Automobile Club of the Auvergne kept muttering about building a new link road across the middle of the circuit to reduce its 8.055-kilometre (5 miles) length to half, as the drivers didn't like being away from the pits for three minutes on end. The Grand Prix circus had not been to Charade since 1970 and had spent so much time on Autodromes that they had forgotten what the Charade circuit was like, apart from it having more than 50 corners and at one point giving you a shattering view out into space across Clermont-Ferrand as you are braking for a hairpin bend. Of the present bunch of Grand Prix drivers (or Formula One drivers to be more precise) more than a dozen had never even heard of the Circuit of Charade, they are so new to the game. Eventually the Club spent a lot of money and the CSI accepted the circuit for the Grand Prix of France.

Most of the money was spent on a fine new concrete grandstand and restaurant, for without the support of the spectators and local dignitaries who agree to financial propositions you do not get anywhere, so it pays to look after them first. On the circuit a dodgy bridge on a tight hairpin was removed and a run-off area with catch-nets was built, but apart from that and a little widening in the start area the circuit remained its splendid challenging self and the idea of the link-road shorter circuit was shelved. Throughout the two days of practice and the race the words of praise that were showered on the circuit were almost embarrassing. "Magnificent, Terrific, Superb, The Best in Europe, Marvellous, Beautiful" were all expressions heard continuously from drivers, professional followers, and the elite of the inner-circle of Grand Prix racing. The circuit of Charade has always been all these things, it is just that some people were new to the scene and others had never been to Rouen, Nurburgring, Spa-Francorchamps or Osterreichring. Indeed, the circuit of Charade ranks among the best and sorts out those who can drive from those who are just trying to kid us, although it has its faults, but they are not serious.