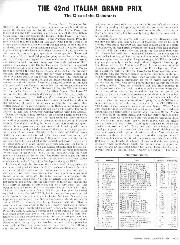 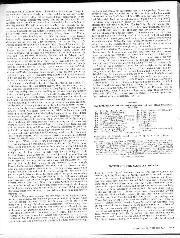 The dice of the debutants

Before the meeting began there was not too much enthusiasm among the Italian populace for the 42nd Italian Grand Prix, even though it was the 50th anniversary of the running of the first Italian Grand Prix. This was because the fortunes of the Ferrari team were at a very low ebb following defeat in the Austrian Grand Prix, the race in which they rose to the top last year. Added to this were a lot of newspaper stories that Enzo Ferrari was not going to send any cars to Monza, as a protest about something obscure, so it was not surprising that when practice began on Friday afternoon at 3 p.m. the Monza Autodromo was pretty empty, apart from the competitors.

There had been quite a bit of unofficial practice going on earlier in the week, with Tyrrell experimenting with a rear-mounted water radiator layout, and Goodyear and Firestone doing tyre tests with various of their customers or clients, while Dunlop had a new footbridge inaugurated on their behalf, it being in the classic half-tyre form across the Monza track just beyond the long Curva Grande at the end of the finishing straight.

Everything was warm and dry when practice began and Amon was first away, in the revised Matra-Simca V12, sounding as sharp and exciting as ever it did, and the driver sporting a brand-new moustache and mini beard. There was plenty of activity on this first afternoon and it was Cevert who was soon setting the pace, but there was no sign of a Lotus 72 for Herbert Muller, the Williams March 701 for Carlos Pace or the Bellasi for Silvio Moser.