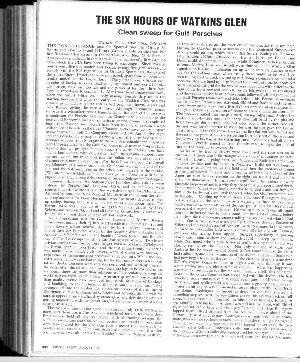 The long-distance race for Sports-Prototypes (Group 6), Sports cars (Group 5) and GT cars (Group 4) held on the short but fast Watkins Glen circuit in the north-west of New York State in America was significant in that it saw the final demise of 3-litre Group 6 cars, which the FIA have been trying to encourage. Since Porsche built twenty-five 917 models and Ferrari twenty-five 512S models, to comply with the HA regulations for Group 5 Sports cars, the days of the 3-litre Sports-Prototypes were numbered, apart from an occasional freak situation like the Targa Florio. The 5-litre Group 5 Sports cars, in spite of having to carry road-going equipment and use a full-size windscreen, were just too fast and too powerful for the 3-litre free-formula Prototypes to combat. Le Mans was the ultimate showdown, when the fastest 3-litre could only manage fourteenth place in the starting line-up, and when the entry for the Watkins Glen race was drawn up all factory 3-litre entries had been withdrawn, Matra and Alfa Romeo giving the race a miss. Although it counted points towards the Manufacturers' Championship, that side of the race was insignificant for Porsche had won the Championship already, so the race could be viewed on its own merits as another round in the spirited battle that Porsche and Ferrari have been waging all season, always with the odds heavily on the side of Porsche, as they give factory support to two teams, the Gulf Oil Company sponsored JW Automotive team and the Porsche Konstruction, Salzburg team, the latter having much stronger support from Stuttgart in the way of mechanics and engineers from the present factory, the Gulf team being much more self-supporting. Against this two-pronged Porsche attack the works Ferrari team have had to battle alone, with only rather feeble background support from private owners, but in spite of this the Italian cars have never let the German ones have an easy time. For the 6-hour race round the small 3.7-kilometre (2.3 miles) circuit the Gulf team were at one end of the pits and the Salzburg team at the other, with Ferrari in the middle.